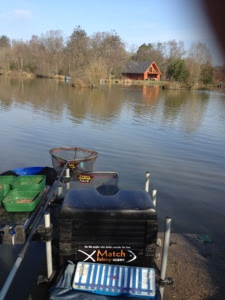 I drew peg 30 on Tanners again!  I was a little disappointed as I wanted to fish somewhere else on the lake, but on the up side at least I knew what I was in for and how to fish it.
The Set-up
After plumbing up the 13 & 6 metre line I had 6 inches difference in depth, so marked the top kit with both depths and would use the same rig, adjusting the depth when changing swims.
Steve May had given me some good tips on groundbait to prepare it as sloppy as possible while still holding it’s shape.  It allows the skimmers to feed on it straight away.  So I prepared the groundbait as normal and then in another tub prepared some sloppy groundbait.
The All-In
I fed two balls of sloppy groundbait with caster and chopped worm on the 13 metre line and also on the 6 metre line.  The aim was to give both these lines 30 minutes to an hour to settle.
Flicking the top two rig out I quickly had some small roach and then a couple of roach around 5oz.  The swim then went quite, so I baited up with half a worm and soon had a nice perch from the bush.  Trying the left side of me with the top two got some more roach out and next thing I knew, 30 minutes has past so time to try the close line.
Kinder cupping in a nugget of groundbait, I caught some decent skimmers from this swim and after an hour my match was well on track.  I topped up the 13 metre line with another ball of sloppy groundbait and went over it.  Really good skimmers of around 8oz to a 1lb were coming to the worm bait, then I picked up a bonus fish in the shape of a crucian carp.
Moving into the second hour I had my first large carp, it charged around the long line and then through the 6 metre line.  Using Stevie May’s “Zoro” technique, which is turning the fish very quickly left and right a few times while on the top two and then lifting up to net it.  It worked and the Mirror carp was soon in the landing net.
The match took a turn for the worse now as I couldn’t get either the 13 or 6 metre lines settled and I spent the next couple of hours with few fish to show for my efforts.  The fish I did have were still decent skimmers, just not in the numbers I would have liked.
Meantime, young James next to me had really started to bag up pulling fish after fish out.
I went back on the top two swim and netted some more nice roach and a good skimmer.
Hour 5, my peg had finally settled and I was getting back into a rhythm with the skimmers starting to come out to play.  After bumping a couple of fish, another carp, this time a common carp decided to wreck the party!
The last hour I was scratching for bites.  I knew I had been beaten by James next door and Pete Merce, what would the scales show the final result?
The Result
23lb 12oz, 5th in section, Steve May beat me by 10oz, 11th position overall
Link to Matchfishing Scene Section Results

22nd out of 28 Anglers, not the best result, but encouraging for my first ever silvers festival
Link to Matchfishing Scene Overall Results
The Team Result
Team A won for the second time this week, another £35 and brown envelope, I could get used to this ;-)
Conclusion
I felt as though I knew what to do on Peg 30, the new groundbait mix had brought better fish than my previous experience on the peg.  It was just a shame the carp killed off my swim and it took a long time to settle the skimmers!