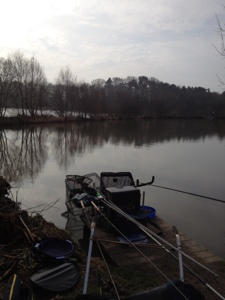 Final day fishing at Stafford Moor and Herbie had organised another MFS Champion League match with both a Carp and Silvers Pool, so I was looking forward to getting the rods out and trying to bag some large Stafford Moor Carp.

The match would be over both Woodpecker and Tanners with Woodpecker being the favoured lake as the carp had been showing a lot over the week.

I drew out peg 1 on Tanners.  Andy, Stafford Moor fishery owner said that the wind was blowing out of the peg and it would be tough for me, but thats the luck of the draw bag.

Peg 1 on Tanners is an end peg, the lake curves around from the left side up to Peg 36.  It was clear that fish were feeding as you could see blowing in the calm water and Chris Haines next to me on peg 3 had mentioned that I would need to chase the fish up that bank.

The Set-up
The match was a 5 hour match and we were to start at 10:30, I arrived at the peg at 8:30am and was already settled by 9am.  Animal from the Lodge of plenty came down to see me and that breakfast was served.  What a way to start a match!  I had a full breakfast and still had plenty of time to finish my set up ready for the match!

The All-In
As Herbie sounded the hooter I put out the bomb rod, after I had found the bar across the lake.  Catapulting around 10 pellets across the line.  The aim was to watch venue expert, Chris Haines on the peg next to me and match his feeding patterns with the pellets.

After 30 minutes the tip flew round and a 3/4lb skimmer was soon in the net.  The carp were not topping and as Andy had mentioned, the wind was blowing out of my peg and I was faced with pretty much flat calm water.  Chris Haines was having difficulty seeing his float as the sunlight was in his peg and the ripple on the water wasn't helping matters, although he had fish in his peg and I didn't.

After a couple of hours I had 5 skimmers in the net and one 2lb carp.  The match was going to plan.

I cupped in four large balls of groundbait mixed with caster, dead red maggots and corn.  I would check this line in the last hour of the match.

I could see the fish blowing and also how they did move up the bank, so I changed the bomb to a small maggot feeder.  This resulted in another 2lb carp.

The fish were starting to top so I decided to try the waggler line.  Finally a better fish a lovely 4lb mirror carp which had a blue tinge to it.  No more fish appeared on this line.

In the final hour I went on the pole line to see if any carp had settled on the groundbait, but nothing apart from a roach.

The Result
Andy came around with the scales and I mentioned the day had been tough.  He did say that they shouldn't have put peg 1 in the draw, but never mind.  I managed just over 14lb of combined weight.  36lb won the carp pool on Tanners, we were expecting bigger weights given the weather in the week.

Conclusion
All week everyone had been fishing at 14 to 16metres and the carp had shown themselves here.  So what had everyone in the match done?  Picked up a rod and gone well past the 16 metre line, the carp simply were not there, they were still on the 14-16 metre line.
Match Fishing Scene (MFS) Matches Stafford Moor
Location: Stafford Moor Fisheries