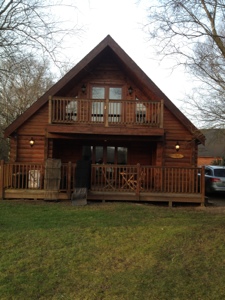 After spending a week at the fishery staying at the what can only be described luxurious lodges I feel that I can give all blog readers an insight into this jewel in Devon.

The Lodges
I stayed in Maple Lodge, which is the first lodge on the left as you enter the fishery.  Sharing the lodge with me where two other MatchFishing Scene members, Andy G and Rich H.  As you can see by the picture, the lodges have a wide balcony both on the ground and first floor, the only thing you need to watch out for is slipping in your wet boots.

Either side of the double entry doors are two secure lock up's for tackle and bait which include a freezer and washing machine.  The kitchen is fully appointed and you don't need to bring anything apart from your condiments, tea, coffee, milk, etc.  The downstairs lounge is spatious with a dinning table that can seat 6 people with ease and some of the lodges have a sofa/bed in them, inlcuding a small TV on the wall and further storage cupboard.

There are a further two bedrooms, a double and a twin including a large bathroom with bath for those weary anglers after an exhausting day on the bank. 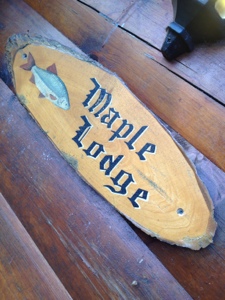 Upstairs you have another living area with large screen TV, plumbed into Sky, a large outdoor deck that over looks Beatties or Tanners Lake dependant on which lodge your are in.

Finally, there is a double room with ensuite bathroom including shower.  I managed to blag this room ;-)


The lodges are very clean and tidy, that is until we had stayed in them for a week, but Andy and Debbie's army of cleaners soon put this right for the next tenants.  The bedding, matresses and pillows are very comfortable ensuring a sound night of slumber or maybe that was also to do with the amount of beer we all drank at the "Lodge of Plenty"?


Would I stay here again?  Without a doubt, comfortable, clean, friendly and very close to the lakes.

For more pictures of the Lodges, check out the Stafford Moor website under Holidays


The Fishing
During the Maryuku / MFS Silvers festival we fished both Tanners and Woodpecker lakes.  Tanners is the larger of the two and more sport was seen from Tanners during the week, although it appeared that more carp were caught from Woodpecker.

All the lakes have good sturdy platforms to fish from, but be careful as they can get quite slippy after rain, something which Chris Haines, local tackle dealer, co-sponsor and venue regular learnt to his cost on day 3.  Chris never did tell us the depth close in or what the bottom was made from, at least he took the Dive scoring from the Lodge of Plenty members well ;-)


Tanners and Woodpecker are stocked with a variety of fish, Skimmers, Bream, Roach, Rudd, Perch, Goldfish, Carp and Tench.  The tench are your normal browny green colour but there is also a high mix of the beautiful golden tench variety, something which I caught on day 1 and was overwhelmed by how beautiful the fish looked.  All the fish are in excellent condition.


Stafford Moor fishery rules are simple, don't mix carp and silvers, no method feeder, barbless hooks and a very sensible net limit of 50lb of silvers, 65lb of carp in one net.


The sport is brilliant, with only one day from my week proving difficult for bites, but that may have been down to the angler, not the peg!


Andy Seery is a great help too, letting you know all about the peg your about to try your luck on and even coming round to see how things are progressing and helping out with a couple of suggestions to get more fish in the net.

Overall a place that I will go back to!  Thanks Andy and Debbie!

Lessons Learnt from the Silvers Week
Here are some simple lessons that I learnt during my week.  MFS has some top class anglers who attended the festival, all of whom where very willing to share tips and tactics to all who would listen.
Tight lines!