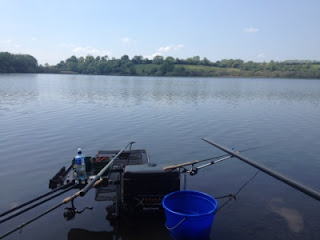 Day 2 of the mini Irish fishing festival.  Surprisingly we were all looking rather refreshed after sampling two nights of Guinness at the Anglers Rest.

We had decided to come back to Foxholes in the hope that the bait we had put in on the previous day would have bought some fish to the area.

Today I was fishing on the peg that Glynn was on yesterday and my partner for the day was Fred.

The Setup
As the previous day, I went for the same set-up:
The All-In
I balled in 2 large balls of groundbait packed with red maggot and sweetcorn and would let this swim rest for at least an hour.  While waiting I went out on the feeder baited with double red maggot.

I had decided not to bait as heavily today on the pole line so as not to disturb any feeding fish.

Going out on the pole line the sport was a lot better and I managed to put a good string of fish together.  After an hour the line died, so I topped up with groundbait and went back on the feeder.

The fishing was sporadic to say the least, but all the lads were catching.  Paul was getting some good fish shallow on his pole line and the others were catching on the feeder lines.

The pole line came good later in the day and I was confident of a better net of fish than the previous day.  We packed up at 4pm and started the weigh in.

The Result
I weight 8lb, Paul weight 9lb and the others had weights from 2lb to 5lb, at least everyone that was there caught!

Conclusion
Having put some bait in on the previous day, it was clear that the fish had found it and settled over it as our weights showed, but it was still a tough day and the weather was still very bright and cloudless which didn't help, apart from topping up our my now sunburnt skin!