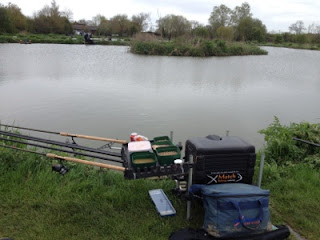 My section I would be fishing Selwood Lake today and then the outer snake lake low peg numbers, also know as cyanide straight the following day.  Nick who organises the day scores the two days by sections and points for your section placing.  The final day placings are dependant on points scored and in the case of any draws weight will determine placing.

The Draw
I drew peg 4 on Selwood and had Jamie and Bez for neighbours.  Peg 4 had an island chuck but also a large bay that I would be sharing with Jamie.

The All-In
Plenty of time to set-up was a welcome bonus particularly as the hang-overs where not helping with getting the gear organised together with a flat tyre of the barrow I had to carry all the gear to the peg!

Cupping in some micro's, 4mm pellets and red maggot on the 12 metre line.  I then sent the method feeder to the island hoping to bag some carp early in the match.

There were plenty of line bites, then the tip rattled round and the first skimmer was in the keepnet.  It was followed by another 4 skimmers before the line died.

I topped up the 12 metre line and started to feed the margin swim with luncheon meat and sweetcorn.

The 12 metre pole line was producing skimmers on a semi-regular basis.  I was using the kinder pot every two fish to top the swim up.

Meantime, Jamie had started to catch skimmers on his pole line while others on the lake weren't having much luck.

Jamie went out on the pellet waggler and hooked a rather large lump, 20 minutes later he landed a large carp, albeit foul hooked... ;-)

My 12 metre line keep on producing and towards the end of the match it looked like Jamie and I would be competing for the section win.

Jamie's margin line required a new style of method, that was standing up while fishing it.  A picture opportunity was too good to resist... We also thought of some new ideas for gear, namely some Preston Innovations Leg Hold up where all off box accessories could attach... the craic was brilliant and I did get a fit of the giggles midway through the match, particularly when we kept of say, "My name is Andy Finlay and today we will be fishing the margin's while standing".

My 12 metre line died off and I tried the pellet waggler to see if I could bag a carp, but I'd left my catapult in the car... d'oh!

So back onto the long pole line as the margin swim had produced nothing.  I hooked two large carp, but they both tore off into the distance with my blue hydroelastic at full stretch.  One fish went into Bez's swim next to me and catching his line, the hook length broke.

The second fish tore straight off to the island the the hook length came back with a curly tail, the knot had obviously given!

I managed to string together some more skimmers before the all-out.

The Result
20lb 4oz and a section 2nd, Jamie pipped me by 12oz.  I picked up £35 in the super pool and my second pound from Animal who was also in the section... get in!

Conclusion
The weights on Selwood were very low, but I was very happy with a section 2nd.  Forgetting my catapult was a fatal flaw, although not many people had caught on the pellet waggler.

Wig night out in Salisbury
Below are some pictures of the lads with our wigs on, just to cause a bit of embarrassment to all ;-) 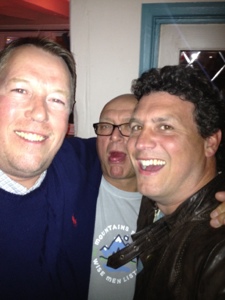 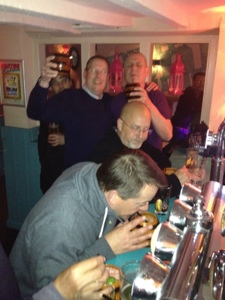 Anonymous said…
lucky bar lambs think it reminds a few with that cocktail and straws milo lol
20 May 2012 at 07:48