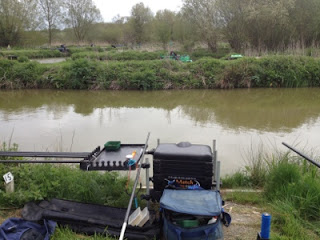 Day 2 of the Withy bash.  The previous nights outing in Salisbury was pretty much as the friday night, a little drunken, although we did end up in a cracking curry house!

Today I was pegged on the Snake Lake, outer ring, low peg numbers or cyanide straight as the lads call it.

The Draw
I drew peg 14 and had WithyBagger and McPikey for neighbours on the day.

The Set-Up
Today would be pole only, no need for rods and with 14 metres across a relatively easy day to fish the far bank.  My lines were:

The All-In
I cupped on the two track lines, one with meat and the other with pellets and went straight over to the far bank with a 4mm expander pellet and kinder pot with 4mm and dampened micro's.  I was told to fish tight up against the bank and the float soon buried due to a small skimmer.  The action then started, repeating the process but with a 6mm expander pellet the first large carp was on and my blue hydroelastic was being stretched to the max and a nice 4lb common carp was in the net.  The first hour passed by very quickly and was quite tiring due to the number of carp coming from the far bank.

I lost a couple of good fish and decided to change my blue hydro to white hydro which helped playing the bigger fish.  After 90 minutes, I estimate I had around 30lb of carp in the net.  My neighbours, particularly WithyBagger were also doing well with the same tactics and McPikey was getting some good lumps out.

The line went dead for all three of us, looks like the fish had wised up and moved off to a safer area.

The snake lake was moving from left and right all day long and there was plenty of debris floating past making it difficult to ship out without snagging debris on the line.

I tried my margin line with no success and started to fish the track line's I'd been feeding.  This area produced skimmers and roach only.

In the last hour of the match, I felt that Withybagger was ahead and that myself and McPikey were around equal.  I managed a couple of carp late on in the match by changing tactics, feeding a little heavier on the far bank and letting it settle while getting silvers from the track line.

Disaster then hit, my far bank rig had caught in the bush and came back trashed!  I plumbed up another rig and went over for the last 30 minutes of the match.

Just before the all-out, McPikey hooked a large fish and landed it, which I felt had beaten my weight.

The Result
40lb 4oz and section 3rd.  McPikey had landed a large carp right on the whistle which tipped me out of the section 2nd.

But the best was yet to come.  With the points I gained from yesterday's section 2nd, I ended up being joint 3rd overall with Gareth.  Gareth took the 3rd place money as his weight was more than mine, but I was really over the moon to finish so high, particularly with the standard of anglers.

Conclusion
A great result for me personally.  Two great days and I feel that I should have exploited the track line more while fixating on the far line and the larger fish.  I lost a number of big fish, the final one spooking badly across the far bank.
Match Fishing Scene (MFS) Matches Witherington Farm