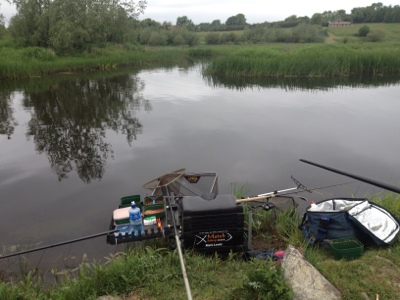 Day 4 and we arrived at Trinity Lake cut to see Francis McGoldrick doing a feature with Dave Houghton from Active Irish Angling.
Directions to the cut at Trinity Lake can be found on this link.

While chatting to Francis, he had netted 10 hybrids with very simple methods.  Those methods I would get to try for myself and end up having the best day so far in Ireland.

We found 6 swims for us all, Paul and the lads had kindly pegged me to the left of Francis where the cut meets another channel.

The Set-up
Pole only today, just as Francis was doing, so it was 12 metres of pole coupled with a very light float to trot down the swim and fish shallow.

I did set up a maggot feeder to try and plunder the far margins for any Irish tench...

The All-In
Francis was feeding caster and his hook bait was a single red maggot and as I didn't have any casters with me Francis kindly gave me a pint to feed with.

First couple of trots down and feeding about 15 caster every time I soon found the kill zone and the float buried with the first hybrid in the net.

This was real simple and enjoyable fishing, after a couple of hours I changed to a caster hook bait which produced a better stamp of fish.

Francis gave me some great tips during the day and also mentioned that the hybrids were quite territorial and will the bites would tail off, they were still in the swim were the feed was going in you just had to adjust something, like depth or holding the float back a bit more to get them back on the hook.

The action kept on going for the majority of the day.  The rest of the lads were also having a good day and we were all catching good fish.

I helped Dave and Francis with his catch shots and what an impressive net it was, an estimated 65lb of mixed silvers!

The Result
I weighted in 16lb of fish and took the top weight, partnered with Malcolm we took team honours that day.

Conclusion
Simple tactics produced a great days sport.  The weather was a lot better, overcast with a good ripple on the water.  Light lines (0.12), small hooks and light elastics were the order of the day.  A fantastic days fishing!