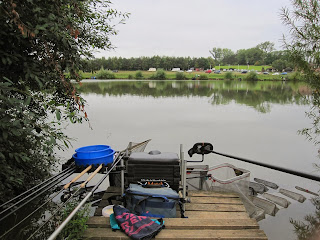 Saturday saw the final day of the Larford Lash-up and today I would be on the Specimen Lake.  There were a few sore heads from the night before but no notable incidents as with previous Lash-Ups...

The Draw
I drew on the Chalet Bank of the Specimen lake peg 67.  I've only ever fished the Chalet Bank so I had a pretty good idea of what to set-up.  My neighbours for the day would be Duffman and Bruce but unfortunately it would be a quiet match as we couldn't see each other due to the thick foliage around our pegs.

The Set-Up
As I was tackling up, Andy Kinder and Sarah came past.  Andy's comments on the peg were nothing but great, in fact pegs 67-65 were his favourite area's on the Specimen lake.  The approach would be as follows:
Again a simple bait list, 8mm Fishery Pellets, micro pellets, Sweetcorn, Expander Pellet and Groundbait. 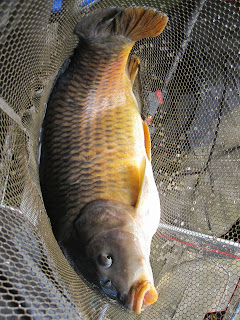 Potting in 3 balls of groundbait with sweetcorn and pellets on the pole line straight ahead and as yesterday straight out on the bomb and pellet while pinging 8mm pellets over the top of the line.  I was also using my new Frenzee Net Rest which is a great little innovation.  It took about 20 minutes for the first fish.  The seagulls were taking the pellets from the top and there were a few fish milling around the surface so as the previous day I quick set up the pellet waggler just in case.  Staying on the bomb and pellet for the first 90 minutes I managed to bring 6 carp of various sizes to the net, the smallest around 4lb, the largest about 8lb.

I decided to try the pole line ahead of me, baiting up with a single grain of corn the float went and the first fish took off, a cracking looking common carp!  The short pole line definitely had fish in the swim.  The next fish also tore off and my rig would come back to me all smashed up.  I was using 0.14 line which was the wrong choice today.  So I decided to re-rig with 0.18 straight through which took about 10 minutes to achieve.

Again I was throwing corn over my two margin lines and kept checking for any activity.  Meantime I was topping up the pole line after each fish as it was carp being caught on this line and they can hoover up bait very quickly.

Another hour on this line bagged me some more fish and then I started to foul hook fish... so I decided to try another approach by dropping the method feeder over the same line.  Slacking off the reel drag as bites as this close range are extreme the tip start to nod and the first skimmer came to the net, this would be repeated 5 times... was the groundbait and micro pellets bringing the skimmers in rather than the carp?  So to test the theory I dropped the bomb and 8mm banded pellet over the same line... another skimmer was the result.

The margin line on my right had a couple of large swirls which was just too tempting, so I dropped my margin rig baited with double hair rigged corn and 0.22 line straight through in... the float ran away and the black hydroelastic came streaming out of the pole.  Moving the fish away from the margin it took me about 15 minutes before I saw the fish... it was big!  Another 5 minutes and I managed to squeeze this monster in the net, just!  It was a big fish, so I grabbed my scales and quickly weighted it, 15lb of big fat mirror carp.. excellent!

I stayed on the margin line for the rest of the match.  The right hand margin was producing fish quicker while the left margin I didn't get a knock... I ended up feeding my maximum amount of corn allowed and was baiting with triple hair rigged corn to get the fishes attention.  It was great sport with only a couple of fish lost in the process...

The All-out was called and I felt I had done well, but what about the rest of the section?  I had also lost count of what fish were in which net....

The Result
116lb 4oz and another section 2nd.  I was very happy with that performance.  Well done to Steve who won the section with 144lb.  Then there was Paul (NoHope) a few pegs down and luckily not in my section with a stonking 222lb all caught on paste right in front of him on top 2+2!

Conclusion
My main lesson is to set-up rigs with heavier line for the bigger fish in this lake... Going early on the margin swim really helped my end result, so it should never be overlooked prior to the last couple of hours of any match.