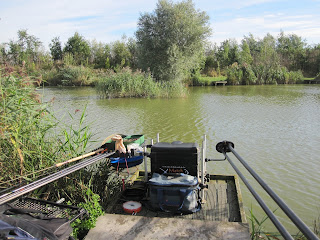 With Mark now 4 points down we return to Rookery Waters, Pidley which could be classed as Mark's home water where he has grabbed some large bags pleasure fishing so the pressure was on me to try and beat him today...

We had tried to contact the owners to request permission to use keepnets but could not get through to them in time.  We arrived and found that a match would be on Magpie lake and the peg that Mark wanted to fish was in the match...

We took a walk round and decided to fish pegs 31 & 32 which would not interfere with any of the match lads.  The weather was taking a turn for the worse with high winds and rain predicted for the afternoon, so all the wet weather gear came out!

We decided to zero our scales with a wet landing net and would weigh each fish, rounding up and down the weight of the fish and clicking away our weights.  It was a good way to figure out who wins at the end of the day.

The Set-up
I had a method chuck to the reeds, so the method rod was broken out although it wouldn't get any use today!  The pole lines were as follows:
Bait was sweetcorn, dead red maggots, casters, 6mm pellets, expander pellets and groundbait. 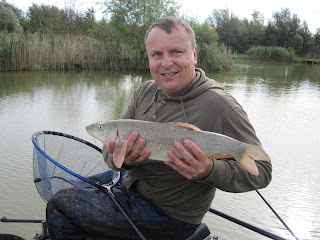 A 9:30am start and I kicked off the 6 metre swim with a half pot of 6mm pellets in two balls of groundbait.  Lowering the sweetcorn hookbait in and pinging 6mm pellets over the top it was clear fish were in the area already.  The float was moving about and eventually the first dink and fish on, a lovely mirror carp at 2lb.

Mark's first couple of fish on his long pole line were Barbel, cracking fish, topped by a lovely 4lb'er.

It was clear that the fish were not on the bottom as a couple of foul hooked fish quickly confirmed this, so I put in a large pot of 6mm pellets to try and get them back on the deck and stopped pinging pellets over the swim.  5 more fish later and 90 minutes into the match Mark had gone shallow in the next swim and it was working for him.

I was around 8lb up on Mark as we compared clickers but his catch rate shallow he was gaining ground and would soon over take my weigh.  I had to follow and go shallow.  Back to pinging pellets out the first 4 fish were lovely rudd, but the carp would follow especially as I upped the feed.

At the risk of this being a very short blog we both stayed shallow until the last hour of the match.  It was very busy but there is nothing like the "thunk" as the pole dips and the elastic stream out when fishing shallow... Both of our clickers were working over time and we both soon hit 50lb of fish.

I had fed 5 pints of 6mm pellets and we both had to change depths a couple of times to keep the fish coming.

With 90 minutes to go I primed my margin and potted in 5 cups of groundbait laced with casters and dead reds and threw a couple of handfuls of corn in the margin.  My shallow line had dropped off a bit and Mark was still catching taking a 15lb lead.

I started to notice swirls in my margin and could not resist.  The margins are deep at this venue and it was clear I had a lot of fish there which lead to many foul hooked fish.  I backed off the feed and hair rigged two pieces of corn waiting for the fish to rip the elastic out to avoid foul hooking any other fish.  I managed to winkle 3 fish out but foul hooked about 6, something had to change!

The fish were up in the water in the margin, so I dropped my shallow rig in and fed casters over the top.  You could see the fish and there tails, they were slurping at the float but the shallow rig was working and I was hooking up a lot quicker and avoid foul hooked fish.

3:30pm came round and we called the all-out... had I done enough to catch Mark?

The Result
113lb of fish on the counter, Mark getting me by another 11lb and ending up with 124lb of mainly carp.  Well fished matey!  Mark had grabbed a point back!

Conclusion
As with yesterday, going shallow changed the cate rates.  The weather while overcast, raining and blustery did not put the fish off being shallow.  I had problems in my margin swim, loads of fish in there and plenty of foul hooked fish...  going shallow in the margin was the key to catching them!
Rookery Waters