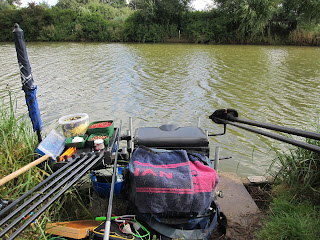 The final day and the Monkees only need 8 points out of the 20 on offer to secure the bragging rights over the Shandees.

Today the match rules allow any method with in the Glebe rules.  We would be fishing one on one and we wouldn't know who until the draw was completed.

Phrase of yesterday, "you fringe" was being used to excess mind you!

The Draw
The Shandee's drew first and put their names down on the boards split across Pools 4, 5, 6 & 7.  Then the Monkees drew.  My draw was Pool 6, peg 88, the exact peg that Sconey was on yesterday, my competition was Rick (Happy Dangler) on Peg 89.  Funnily, Sconey drew my peg from yesterday Peg 86 and he would be fishing against Shogun.

The Set-up
Based on yesterday experience on Pool 6, I opted for the following:

The All-In
Learning from yesterday I cupped in two large pots of hemp and corn on the 5 metre line and went straight over it with a single grain of corn.  The float dipped and the first carp was straight on... after 20 minutes I was 4 fish up on Ricky and very happy with my start.  2 of these fish were large, around 7-8lb.

Today however the fish would be in a different mood, or was it just my angling???  While I got off to a great start, the 5metre line bites weren't coming as quickly as yesterday and after the first hour I had 5 carp on the clicker...

After 10 more minutes I decided to change things a little and sent the feeder over to the far bank.  This resulted in a three more fish.  Ricky was also struggling on the 5 metre line so had gone to a longer pole line and soon launched the feeder long in search of fish.

I keep feeding the 5 metre line and changed between feeder and 5 metre line.  Once the clicker had reach 13 fish (unlucky for some and seemingly unlucky for me too) I just couldn't buy a bite.

I went the next hour without any fish and with only a few hours left it was again time to start preparing the left hand margin.  Shogun who was fishing against Sconey started to fish a light bomb a couple of feet out and was piling in the corn which resulted in 3 large fish, so I decided to copy his approach.

Throwing in corn short with double corn hair rigged on a very light bomb it was clear there were fish in the area as the tip was moving around with line bites... after 15 minutes the tip wrapped round and a fish rocketed off to the far side of the lake.  The reel drag was screaming and the fish could be clearly seen across the lake with its back out of the water.  I sunk the rod deep under the water and the fish made its way across to Ricky's peg even swirling under whee his float was, which Ricky kindly lifted out of the way... thanks.  Gaining some line back the fish took another run and the main line broke...

Gutted... I suspect that I had the rod to deep in the water and the line caught on a stone which broke it.  It was certainly a large fish with plenty of energy!

The final hour I decided to fish the feeder in my margin on the left, but after 15 minutes, no line bites and no indications of fish so I dropped the feeder in the right had margin which immediately produced a fish getting me off the dreaded 13 count!

Two more fish from the margin, one which broke the hooklength and the other in the net.  The all-out was called.  Had I done enough to beat Ricky?

The Result
85lb taking a victory over Ricky's 55lb and earning me a point for the Monkees and a pound from Ricky!

Conclusion
The weights weren't as good as the previous day for me and deciding to go onto the feeder mid match when the 5 metre line helped keep me ahead of Rick.

So, how much bait did I use during the 3 days?