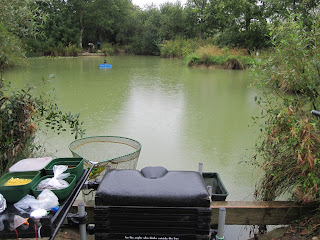 Getting back to the Mark vs Mark competition, Mark is currently down by 3 matches so this weekend there are a potential 2 points up for grab.  We both last fished at Wold Farm back in July 2011 where a mixed bag of fish was our reward from the Island lake.

We arrived at 8am as requested by Dax and were met at the tackle shop by Ron (Dax's dad).  Now Ron is a unique character, very dry and very funny.  We went to pay our peg fee's and he said, "Well, I'm not a mind reader....", sorry Ron, "Island lake with Keepnets"...

Wold farm is renowned for its mix of fish, it's like a fairground, you never know what is going to come out next!

Mark selected his peg where he had an island to go at within pole range, bunch of lilies to his right and a lovely looking margin swim to his left.  My swim was on the right of Mark, with open water in front, lilies to my left and the point of an island to my right hand side.

The Set-up
Today would be pole only, although I was tempted to break out the pellet waggler... so I selected the following lines:

Plumbing up I found uniform depth for all three pole lines so a single rig would suffice.  I was fishing with 0.14 line, size 16 wide gap pellet hook coupled with blue hydro.


The All-In
We were both ready by 9:30am, would fish 6 hours to 3:30pm.  I kicked off the 5 metre line with some pellets and caster and dropped the 6mm expander over the top.  It only took a couple of lifts and the first fish was in the net, a lovely multi colour mirror carp, one you would be proud to have in a garden pond! 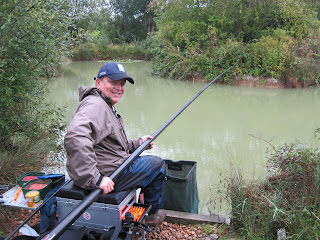 The 5 metre line was working very quickly for me and I was topping up with some pellets and caster every 4 fish.  After the first hour I had around 20 fish.  Mark was struggling, he had lost a number of fish and then his rig caught on a snag and it was lost.  The float just sat there in front of him like the proverbial middle finger!  To top this fishing the same swim to the right, which float do you watch???  The lost float proving a bit of a distraction.... for me anyway!

About 90 minutes in the 5 metre line died so I potted in more pellets and caster to the shelf near the island on my right which resulted in a couple of fish but not at the rate the 5 metre line was producing.  Mark was starting to get into his stride and was catching fish on a regular basis.

I decided to swap to the lilly Pad swim which was the right choice as it produced from the off like the 5 metre swim had earlier.  I was hooking roach with an expander on the hook and getting better fish on sweetcorn.

As the afternoon past by us Mark had gone shallow across to the island.  He was bagging some fish and they were almost out of the water getting pellets from the mud in the far bank.  I decided to follow and targeted my island.  My island had a lot more cover that would also get in the way, so I was pushing the rig under the overhanging plants.  I had a banded pellet on the hook and could not strike, so would wait for the elastic to rip out... it wasn't long before the blue hydro was out and I was steering a fish away from the island.

I took a couple of fish from this swim and then disaster, my rig caught and it broke off... quickly putting on another shallow rig I realised that I had left my hooklength box in the airing cupboard at home, some 75 miles away... oops!

Mark was getting fish shallow and his fish were of a good stamp and we both noticed there were a lot of fish milling about the surface.  Being "fairground" fish you can see them a mile away!

I decided to go long as there were some large carp about 15 metres ahead of me.  First drop in and I hooked the big fish that I could see.  It took a lot of elastic and almost got to the aerator, then the hook pulled!

I had also started to flick some casters short of the island to my right and I could see a ball of fish forming, golden and blue orfe, ghost carp and other carp.  Using my top 2 and 2 sections I dropping in over this ball of fish while throwing casters... fish on!  Golden Orfe in the net.  This would prove the turning point for my day.  Going through 4 pints of casters I managed to bag a lot of good fish from this swim.  It was amazing to the fish coming up and the elastic streaming out...

3:30pm came round and we called the all out.  Mark had been catching well had my late run kept me ahead?

The Result
48lb of colourful fish for me, Mark was only 9lb behind with 38lb 8oz so I got the all important point taking me 4 points ahead of Mark in our mini competition.

Mark fished well despite a couple of rig losses and early fish losses.  All in all a great day out at Wold Farm!