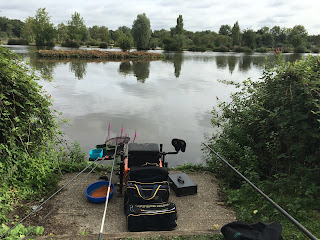 A pleasure session today at Gold Valley with Nathan before he went back to college.  Today my aim was to fish for the skimmers and large slabs while I Nathan was going for the carp.

The Pegs
Gold Lake on the canal side was our chosen area.  Permanent pegs 6 and 7.

Nathan had a chuck to the island point and also in front of the island.  My peg next door had some open water to aim for.

It's great to see the plant life around Gold Valley coming back after it's major hair cut some years back.

Set-Up
Nathan set up a 10 foot bomb rod with a hybrid method feeder on it and later he would use the pellet waggler rod.

Baits were Gold Valley 6mm and micro pellets together with some sweetcorn.  I also decided to try some bream specific groundbait (i.e. non fishmeal).

The Session
Before I'd even set-up anything Nathan was straight into a lovely common carp.  A bit of a mishap with the landing net detaching from the landing net pole was quickly resolved and the first fish was in the net!

Getting my peg set-up I potted in 3 ball's of groundbait together with some sweetcorn kernels.  If I was in a match I'd rest this line before going over it but as it was a very relaxing day and Nathan's mum Tracy had prepared us a bumper feast of bacon rolls, chocolate biscuits, pastries and drinks it was more than appropriate to start on them which was very welcome after a night out catching up with Dom Murphy and his pals in London town!

While my line was resting and we were eating, the tip ripped round and Nathan hooked carp number two which was quickly in the net. 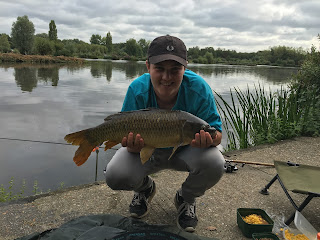 I'd rested the line for 30 minutes and finally dropped the float over the area starting hook bait was sweetcorn.  I'd prepared some 4mm and 6mm expander pellets also but I wanted to try sweetcorn first.  The idea was to remove all fishmeal products and see what happened.

I had a couple of nudges and finally changed to a 6mm expander pellet.  The float went straight away and a small skimmer was on.  This repeated itself with smaller fish for around 30 minutes until finally I hooked a bigger fish of around 2lb.  This was my quarry!

The line seemed to die off, so I topped up with groundbait and started to catch more smaller skimmers but no more larger fish.

My skimmer line die off again, so I started a new swim at the two o'clock position and pinged some 6mm pellets over the line.  Float disappears and the first carp was on!  5 more carp and it was clear that I wasn't getting any more skimmers! 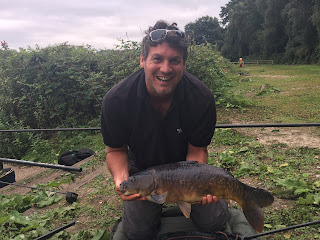 Nathan hooked another couple of fish that came off, but he landed another nice carp to take his tally to 3 fish.

We were due to pack up at 3:30pm and my float dipped on what was to be my "last chuck".  Some beast torn off with the elastic bottoming out and the pole bent at an alarming angle, then the unthinkable happened.  The elastic slipped through the puller bung and up the top two taking the PTFE bung with it!  Bad angling as I should have checked the knot below the puller bung.

All elastics have been checked now.  We finished our feast, packed up and headed home.

Conclusion
The lack of fishmeal clearly had an effect.  The skimmers are so used to it that I could not get any fish until I switched to the expander pellet.  I believe the groundbait held the skimmers, but they were looking for the fishmeal content.

Pinging pellets soon brought the carp in and it was fun taking them on lighter gear that normal!