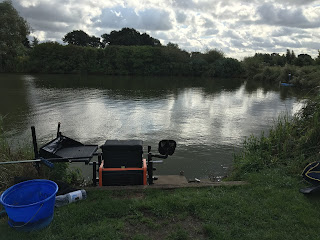 Day 2 and I'd had a quiet night with the Mercers, Daddy May, Ben and Chris Martin which of course I received abuse for at the draw for "not being social" and missing the Longshoot drinks!  Typical, but at least I didn't have a bad head! ;-)

Today was the pairs event, it would be myself and Scone vs Hathers and Pikey!

The Draw
Pool 4, where nobody wanted to be and I had the end peg 75 where Russ Shipton was on the previous day.

I had Pikey as a neighbour for the day.

Set-up
Feeder line to the far bank, pole line at 5 metres and down the right hand margin.

All-In
The wind was blowing away from this peg and I was faced with flat water, with the all-in I went straight on the feeder line, feeling pretty confident after the previous day.

Second put in on the feeder and I had a fish in the net, maybe today wasn't going to be too bad after all?  Well, after the first hour I had two fish in the net... oh dear.

Pikey wasn't fairing so well either with only one fish to his name.

Hour 2, was even worse with nothing at all.  I was chopping and changing my feeder line, 5 metre and margin line in an attempt to get a bite.  Pikey I think still only had one fish.

Hour 3, I hooked two more fish on the feeder which magically managed to snag me up on my keep nets.  It's amazing how a fish can hook you up on a snag or your keep nets.  These two fish would cost me!

Hour 4 and 5, I managed a larger carp from the feeder line which gave me some confidence.  I also had some silvers, mainly Perch from the margins, just as Russ had the day before.

The final hour, Pikey started coming back at me (as he does).  I managed a total of 6 carp and some silvers.  We know that Sconey had caught a rather large carp and that Hathers was admitting defeat.  Had I beaten Pikey for a Munkee point?

Result
20lb 4oz and again being beaten by Pikey who had 27lb!  This turned into a Munkee vs Shandee tie! 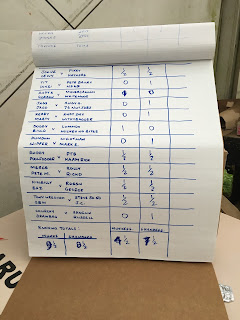 Conclusion
When Roy Marlow says, "you don't want to be on this peg" you know that it's not a great area!  My parting words where, "please don't let me be on Pool 4 tomorrow".  I'd be eating those words tomorrow!