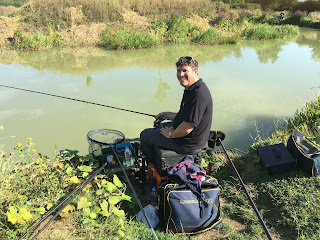 Once we arrived the sun was shining and we fancied a float only match so picked Dani's Lake and pegs 5 and 6.  Mark chose Peg 6 which had the corner of the island

Set-up
Float only and it was clear that the fish were mostly on the island, being on Dani's Lake it was time to break out the waggler rod.  My other line was my right hand margin on top two plus two.

All-In
Phil had kindly allowed us to use nets for out mini competition and we decided to fish for 5 hours.  The lake had quite a few anglers on it today and the weather was beautiful although a lack of ripple on the water. 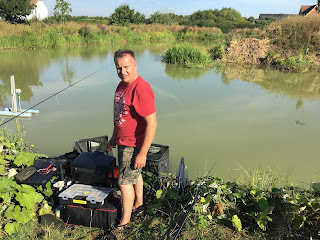 Straight on the waggler to the island with a banded 6mm pellet.  I was getting plenty of indications and was feeding caster.  After striking at plenty of bites but not connecting with fish I swapped the hook bait to double red maggot and quickly got my first carp.

Both Mark and I were having some casting issues and lost a few hook lengths in the reeds.  The Airlander, the largest aircraft in the world, well balloon also went over.  We heard later that it had crashed which didn't have anything to do with our casting, honest.

Mark was feeding and fishing 6mm pellet and his swim was a little slower, for the moment.  I was hooking carp but also small silver fish which went straight back rather than in the keep net.

The day went pretty quickly and the suntan's were certainly topped up.  I tried my margin line later in the day after dripping casters in most of the day.  It was to produce a couple of carp.  Feeding the margin, the silvers could be seen grabbing the casters.  Large rudd in the margins, it was lovely to see.

Mark's swim started to come alive, large chub and more carp.  It was clear that he was about to take the lead.  I tried the island waggler line and 6mm pellet to try and catch up but once we called the all-out I felt I'd been beaten.

Conclusion
The corner swim that Mark had allowed him to fish closer to the island without hitting the reeds (well most of the time).  I ended up fishing slightly shorter and feel that cost me fish... still a great day out and great to be back on the bank. 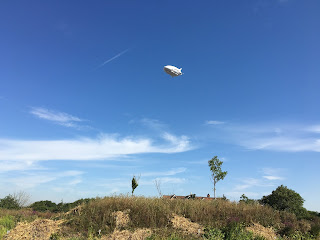