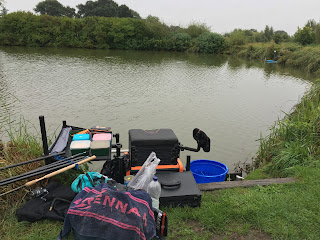 A night at the Longshoot was reasonably quiet and I slipped away early in an attempt to dodge the hangover that normally follows.  It didn't go un-noticed as Andy T busted me.  Sorry matey ;-)

The final day and it would be Munkee vs Shandee.  I did not want to be on Pool 4!

The Draw
I was second to draw from the Munkee bucket/ cardboard box.  I drew Pool 4, Peg 75 again!!!! I was not a happy camper to say the least!  Plenty of sympathy from the lads and plenty of micky taking too...

My neighbour was Callum's secret friend Tom... the less said about that the better!  Only kidding lads.

Set-up
Well I didn't need to worry about my rigs and also the reel was still clipped up and I knew exactly where I had fed the previous but I needed to do something different today in an attempt to get a better weight.

So I added the following lines:

All-In
Today the weather had turned and it was raining but the positive was that the wind direction had changed towards my corner.  There were plenty of fish showing 3/4 of the way across on the bomb line.

Carpy Marty gave me a tip to feed 6mm pellets, overcast with an 8mm pellet and then drag the bait back if no bites were forthcoming.  I'd try that later.

I started on the feeder again and was rewarded with an early fish on the third cast, but after an hour it was still a struggle to get in touch with the fish.

I tried the bomb and pellet line and the trick that Marty had mentioned.  First drag of the bait, settling the rod and it was ripped out of my hand by a very angry little carp.  A few more fish in the net.

The previous day was repeating itself and it was tough to get a positive mental attitude to today but Tom wasn't ahead of me, so I kept the faith and dug deep.

Hour 3 I tried the 5 metre line and finally connected with fish, although it was those pesky Perch again!  Admittedly one Perch was around a pound in weight.

The last couple of hours Tom was bagging on his 5 metre line and I was struggling.  I could only get a fish on that line using the bomb over it and dumping a lot of corn on the line, a trick I'd learnt a few years back.

My bomb line was proving more consistent and so I stuck on this until the all-out.  Big thanks to Ruddy who was on Pool 5 and asked if I was bagging up every 30 minutes or so... Kept my spirits up matey!

Result
40lb 8oz getting batter by Tom who put 76lb on the scales.  Well fished mate!  A Shandee victory.  However, the final results were a Munkee victory overall by 1 point!!!  Well done Munkees, we have the crown back!

Conclusion
I double my weight from the previous day and managed to shake off the depression of fishing such a horrid peg.  Should I have tried shallow tactics?  Maybe, but I opened up more lines today that I normally do in an attempt to beat Tom.

The bomb line proved devastating for Tom and he battered me to submission with a 5metre line and bomb/pellet combo!  Just makes sure you use heavier elastic matey.