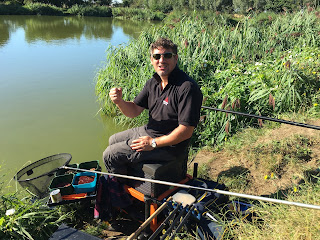 Day 3 for Mark and I and we had chosen to visit Kingsland Reservoir.  Large carp would be the quarry and after the previous day of lazy carping today would be a bit different.

Kingsland provides their own nets so we would have an opportunity to weigh our catch to determine the winner.

We picked swims on the first bank of the large lake near where we had fished back in 2014.

Set-Up
The fish were milling around so line would be quite simple.

All-In
The fish were cruising around, so it made perfect sense to start shallow with a banded 6mm pellet.  Mark's tactics were the same.  The first fish came after 15 minutes of pinging pellets and slapping the float.  After an few hours I had a few fish in the net but the shallow approach wasn't consistent. 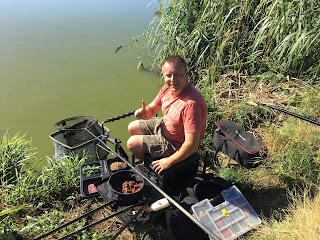 The weather was very warm and the fish were cruising however they weren't taking bait from the top which was tested by flicking in bits of bread.

A new approach was required.  Mark had opted for a pole rig at full depth, I decided to break out the bomb rod and drop it over the 6 metre line.

The bites were savage to say the least and a few fish simply broke the 0.20 hook length with the banded 8mm pellet.

As the day was coming to a close, it was time to try the margins.  The margin lines at Kingsland are very deep, almost 6 foot at your feet and the fish know exactly where the reeds are.  I used double worm and I soon had black elastic streaming out.  I lost a few fish and Mark also lost some large fish too.

Our day was done and it was weigh in time.

Result
We used a crude method of weighing the nets by hooking the last bottom ring of the keep net.  My weigh went to 59lb 8oz.  Mark's went 59lb which was very close with such a rough estimate.  Mark kindly gave me the victory which levelled the score at 1 all for 2016.