Showing posts from September, 2011
Show All 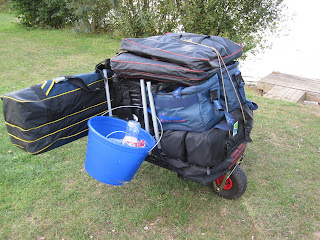 Great exercise! "Day Two at the MFS Larford Lash-up"... Day two was always going to be harder, especially after a night out with the MFS massive ! Most of us arrived at Larford Lakes looking a little worse for wear!  Today we would be fishing the Specimen lake which holds some very large carp or "horses" as fellow anglers like to shout when they have landed one... I drew peg 65 which is on the fair bank of the specimen lake and an area that is a good area for the skimmers and the odd bonus carp.  From the car park to the peg was quite a walk, especially when you have to lump all your gear on a rather small trolley come wheel barrow... My neighbour for the day would be no-other-than Scone, of sconezone and great pole floats fame. The Approach After speaking to Rob Austin, he recommended method line at 16metres, bomb and pellet further out and a meat line at 5 metres if the carp come in. So that was the approach.  Again, due to the low water levels we
Location: Titton, adj Larford Farm (Unmarked), Astley, Worcestershire DY13, UK
Read more 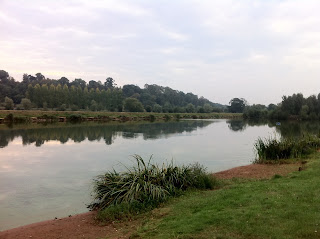 Larford Match Lake Said in a Big Brother voiceover, "Day One at the MFS Larford Lash-up"... Well actually it may have been Day One, but that was followed by night one, Thursday night out with a small group of MFS'ers  in the Robin Hood, Droitwich . I followed Animal and Colin (BNF) to Larford Lakes .  On arrival we met up with Andy Kinder and his lovely wife, Sarah.  Both the match lake and the specimen lake water levels were quite low and today we would be fishing the match lake. The match lake has two sides, the burr bank, which is the man made bank between the match and specimen lakes and what was referred to as the shallow bank.  The bur bank pegs had deeper water, the shallow bank turned out to be very shallow, 18inches of depth at 13metres... Walking round the match lake before the draw there were fish very close in, their backs out of the water, plenty topping, in fact it looked stuffed with fish and not just small fish. The draw arrived and the mot
Location: Titton, adj Larford Farm (Unmarked), Astley, Worcestershire DY13, UK
Read more 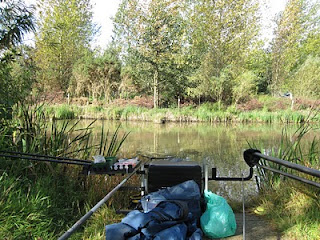 After my day at Drayton, I headed North for the rest of the weekend and decided to fish The Oaks at Sessay, Thirsk.  I have an upcoming match with the Anglercabin guys in October that is on the Poplars lake, so this was my chance to familiarse myself with the venue. The Wilton Angling Club were also fishing the lake, they had pegs 20 through to 54, so the pleasure anglers could select pegs 1-19.  After having a bacon buttie from the friendly and well stocked on-site cafe and buying some 4mm and 6mm fishery pellets I headed down to the lake and found peg 6 looked inviting.  Results from the Wilton Angling Club match on Poplars can be found  here . A couple of anglers had already taken up residence on pegs 1-5 and a few more a bit further up.  I had peg 7 free and thought I could use that to my advantage later in the day. Set Up Plumbing up I found two and a half feet in the channel, just under two foot in the margin and that the far shelf extended quite far out from the bank
Location: Thirsk, North Yorkshire YO7 3BG, UK
Read more 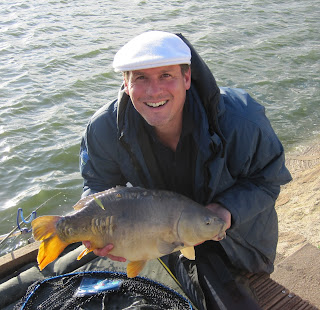 The best of the day - 14lb Mirror The story of 4 fish and two new personal bests!! After a month of not fishing due to other social activities such as tackling and conquering Helvellyn in the Lake District I was itching to get out on the bank again. Mark and I had discussed fishing Drayton Reservior for sometime.  The lure of large carp, averaging 12-18lb was just too tempting...  unfortunately Mark couldn't make the day so I set off on my own. After a call to the baliff, he confirmed that the middle of the dam wall would be the best area to target, between pegs 35 to 55.  Tactics for the day would be Bagging Waggler, Pellet Waggler and Method feeder. Drayton opens at 6:30am, I managed to get there from London at 6:45am... the place was packed!  I managed to secure Peg 53, so within the area that the baliff had recommended.  Drayton has platforms for each swim, with the exception of the beach swims.  The platforms are very well made and quite large with a metal rein
Location: Drayton Reservoir, Daventry, Northamptonshire NN11, UK
Read more
More posts