Showing posts from January, 2022
Show All 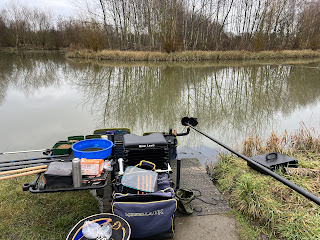 January's outing after a family outbreak of COVID so I booked myself and Patrick on the open on The Arc at Redwood Park in York. Only 6 anglers braved todays open and the ice had been broken by the fishery from pegs 14 through to 21. The Draw The golden peg drawn was 17, my home for the day was Peg 20. Set-up Given the clarity of the water I felt that the pole line for the day needed to be long rather than short. Lines: 14 - 14.5 metres full depth and a shallow rig just in case the fish came up in the water Top two and two line at the near side shelf for dripping caster in for some roach later in the day Waggler to fish past the pole line or in case the fish didnt want the pole over their heads Bomb and bread to fish the far bank in an effort to a ball of carp Bait was a mix pellets, maggots, caster, bread and F1 sweet dark groundbait.  Clarification for another reader, the hooks used were all barbless patterns as per the fishery rules on most commercial fisheries. All-In So the ma
Post a Comment
Read more
More posts