Showing posts from October, 2011
Show All 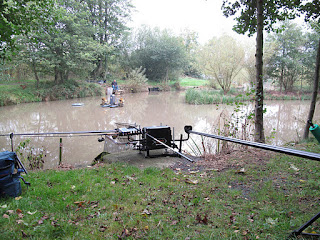 Hoppy's Memorial Match organised by the lads at Peg 32, Poplars Lake, The Oaks Anglers Cabin .  I was looking forward to meeting them all, especially after seeing the banter on the forum. The weather for the day was around 14 deg C, very little wind and quite bright.  Over the weekend the first frost had fallen so would it affect the fishing? I got to The Oaks at Sessay around 8am and quickly headed into the cafe for a bacon buttie and cup of tea.  I spoke to Tom, the owner/baliff and he mentioned that finer lines would be the order of the day, maggot or pellet as bait.  I grabbed 3 pints of mixed white / red maggots, pint of casters and some micro pellets.  My other bait choice for the day would be worm and sweetcorn. ﻿ As I'd not met the Anglers Cabin crew I proceeded to walk around the different groups of anglers in the car park if they were fishing Hoppy's Memorial match... in typical fashion it was the last group I saw that were the lads.  The banter starte
Location: 1 N View, Carlton Husthwaite, Thirsk, Yorkshire YO7 2BN, UK
Read more Mark's Swim As Mark had come down to London for the weekend, I decided that we should give Lake John , Waltham Abbey a go as it would be easy for him to head back to Cambridge.  I'd called Colin, the owner/baliff to check availability. The larger lake was booked for an open match, so we has to fish the smaller lake. A quick walk around the small lake which is a snake lake, we decided to fish the far bank away from the car park.  The weather was a little overcast with some rain.  Neither of us had an end peg advantage.  Mark's far bank had a large cut out.  Both of us had far bank reeds that were alive with fish... it looked like a promising day! We decided to fish a 6 hour match again and use the clicker to record an approximate weight of fish to determine the winner. We headed to the on-site cafe for a cup of tea and bacon buttie. The Setup My swim Without a doubt it was a pole venue, although I also tackled up my 8 foot carp wand with a small method fee
Location: Waltham Abbey, Essex EN9 2BJ, UK
Read more 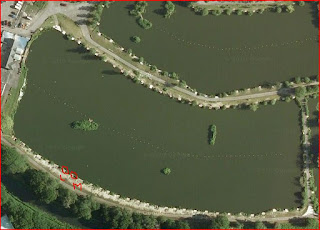 ﻿ Gold Lake Resuming the mini competition between my mate Mark and myself we decided to have a weekend in London and Gold Valley Lakes , home of Will Raison  was our first venue for the weekend.  We decided to fish Gold Lake which is the first lake on the right as you enter the fishery. The lure of large Carp was an exciting prospect and one which wouldn't disappoint either of us. After a quick walk we decided on pegs next to each other that had a chuck to the main island.  Pegs highlighted on the main picture. Mark and I had decided that it would be an all out rod and reel attack for the day, so the pole stayed in the holdall. Mark's Swim, to the point of the island The Setup Waggler rod fishing a 6mm banded pellet with a loaded Drennan crystal waggler.  I also set up a method feeder and bomb rod. Bait for the day consisted of Gold Valley 6mm expander, 6mm and 8mm hard pellet, Meat cut in 8mm cubes, a small amount of Corn and dead red maggots. Mark and
Location: Aldershot, Hampshire GU11 2PT, UK
Read more 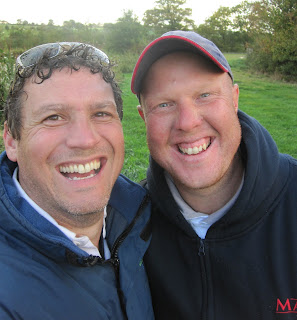 Oooooosssshhh! After my day with Bob Nudd MBE and after hearing great reports about Andy May I decided to book a days fishing with Andy May .  After many email's getting round Andy's and my own diaries we eventually agreed on 7th October at Cudmore Fisheries in Newcastle-under-Lyme. It was an early start for me, leaving London at 4:30am to get to Cudmore, the traffic was kind, but the weather wasn't I arrived at Cudmore for 7am. I met Andy at 8am and we had a cup of tea, bacon sandwich and chatted about what I wanted to achieve for the day and I explain that I would like to go through a typical match scenario, brush up on pole and method feeder techniques.  As the weather hadn't been kind overnight we didn't know what to expect from the fishing.  None-the-less Andy decided to take us on Match Pool 1.  The wind had changed direction and so Andy selected peg 22 for the day with a little bit of ripple on the water. Andy went through my pole floats that
Location: Whitmore, Newcastle-under-Lyme, Staffordshire ST5 5HW, UK
Read more
More posts