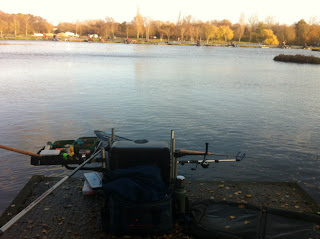 6 weeks without any fishing was a tough break, so I was keen to get on the bank as soon as possible.  I decided to return to Gold Valley in Aldershot.

The temperature was 10-12 degrees C, bright, clear sky with a gusting wind moving from left to right.

The Sussex Winter League match was also on so I decide to re-fish the canal bank on Gold Lake.

As I walked along canal bank I noticed there was quite a bit of carp activity as I got closer to the small island, so I picked permanent peg 16, mid way down canal bank to open water.  The island in the picture was two swims across, so not in the target area.

The Setup
I had decided prior to getting to Gold Valley that I would use bomb and waggler.  So I set up my 10' Bomb Rod with 6lb mainline to a drennan quickstop.  I also set up my 13' Waggler road with a 5 gram loaded waggler.

The Session
I banded an 8mm pellet together with a small PVA "teabag" of 6mm pellets and cast about 10 foot short of the rope in the middle of the lake.

Settling the rod on the rests, I started to ping five to six 8mm pellets midway across every 5-7 minutes over my line looking for any line bites.  In between pinging pellets I set up the following hooklengths:﻿﻿﻿
﻿﻿
I made up around 20 small PVA "teabags" with a mix of dead reds and 6mm pellets. 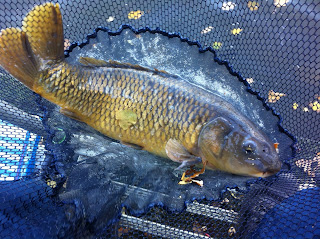 The first bite and subsequent fish came after nealry an hour, around the same time that I started to get some line bites from pinging the pellets midway.  The first fish was a common 4lb common carp.

Casting to the midway mark, again with an 8mm pellet, the next fish came after 30 minutes when the tip wrapped round, this was the first of the larger carp, a lovely common of approx 8lb.

This winter fishing isn't too bad I was thinking to myself, 12lb of fish after an hour and a half ;-) 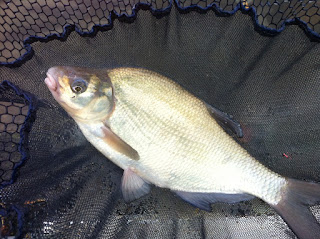 A couple more casts and after waiting 45 minutes each cast, no bites, just line bites... maybe I'd spoken too soon... so I decided to experiment with bait choice to see if I could improve the bite rate, so I put on a 10mm krilled red boilie.  The next bite came a lot quicker although it wasn't a tell tale carp wrap around and the culprit soon made an appearance.  It was a lovely skimmer bream, just under 2lb.

I recast with the boilie and soon had another 4lb carp and similar size skimmer in the landing net.  It was clear that the boilie was bringing in a greater, yet smaller selection of fish and if I was fishing a match I would have stuck with the boilie.

I decided to switch to a nice juicy dendrobaena, also attached to a PVA tea-bag of dead red maggots.  I left the bait in the water for around an hour and just as I was going to bring it back in to re-bait, the tip flew round.  The fish on felt a lot better quality and after a small struggle another 8lb Common carp was lying in the landing net.  Maybe the worm was picking out the better fish, but the catchrate was a lot slower. 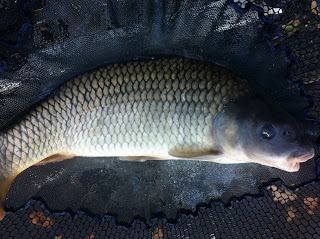 Changing the hooklength and baiting 6 dead red's I wondered if this would produce more fish.  After 45 minutes, nothing, so I decided to go back to the red boilie.  The next 90 minutes produced nothing, even the guys next to me weren't getting any fish.

The final 90 minutes fishing produced two more common carp, a 5lb and 7lb.  The 7lb carp was a very pretty fish, the picture doesn't do it justice I'm afraid.

Conclusion
I felt it was another successful trip to Gold Valley with 40lb on the clicker after 6 hours.  The Canal bank was never blessed with direct sunshine which may have affected the fishing.

I never tried the waggler rod but had a good experiment with baits on the bomb.  I do think that the small PVA tea-bags made the difference and pinging the pellets kept trying to ring the dinner bell for the fish.

I also had a rod license check by the Environmental Agency, which is the first check I've had since starting fishing again.  Both EA officers were very pleasant, took an interest in the fishing and also took the mickey out of my northern accent ;-)  Seriously it was great to see them on the bank checking rod licenses.

Finally, I was lucky enough to win the recent Angling Trust auction "Fishing with a star, Will Raison", so I'm certainly looking forward to fishing Gold Valley with Will!
Gold Valley