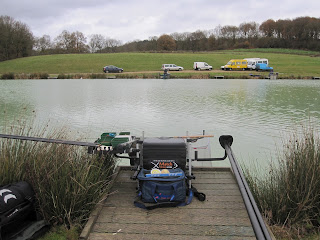 Pikey, aka Dave Pearson had orgainsed a Match Fishing Scene Champion League match at Willinghurst on John's Lake.  As I was free at the weekend, I thought why not and put my name down for the match.

Pikey has a great blog which can be found here.  It will be interesting to read his version of events.

The journey from West London to Willinghurst was around 35 miles, the temperature in the car was a warm 24 degrees C whilst outside it was a chilly 3 degrees C.  I arrived close to the fishery at 8am, the draw was 9:30am so plenty of time... it then took me another 30 minutes to find the place!

I met up with most of the lads in the canteen and tucked into a Willinghurst breakfast, at £5 it was a welcome sight and also reasonably large!

The craic started with Mick the Bookie, Pikey, Malcolm, Carl and Milo... it's always the same great laughs with all the MFS get togethers and great to meet more members of the site.

As everyone had gathered by 9:15, except Tyrone, Pikey started the draw, I pulled out Peg 25 which was the far end of John's Lake.  My neighbours for the day would be no other than Pikey and Shedful.  John's lake is quite exposed to the elements and the water was a very funny colour, it was obvious that the bottom was a light clay.  The colour was almost a cloudy blue...

The Set-up
The pole came out of the bag and I set up two lines, 5 metres where the bottom of the near shelf was, 13 metres.  Both swims were of uniform depth so I used a Malman Snake tied to 3.2lb (0.11) with a Drennan Carp Maggot size 20 to 3lb hooklength, elastic was Diawa Hydrolastic Blue (5-8).  The float was dotted right down with two number 9 stots as back shot and the float bristle was greased.

I also set up the Bomb Rod with a 1/2 oz bomb to fish hair rigged sweetcorn / pellet with a PVA tea bag of pellets.

The All-In
I fed the 5 metre line with a small compressed ball of micro pellets, some red and white maggots and a couple of casters.  The 13 metre line was fed with a half cup of pellets.

I put the bomb out to the middle of the lake with double hair rigged corn and a PVA tea-bag and pinging pellets over the line looking for line bites.

The bomb had been out for an hour and I'd only had a couple of small indications.  I topped up the pole lines and noticed that no-one else on the lake was catching.  I rebaited with a single grain of corn and tried my luck again, 45 minutes past and nothing, no line bites, nothing!

I went out on the 13 metre line with the pole when disaster struck... shipping the pole back I had not fully closed the stonfo connector and my float, line, hook and bait came off... looking for the float to grab it back I realised that the back shot had actually sunk the whole rig... I cast the bomb across the swim hoping to retrive it mainly as I didn't want a fish to end up with a whole rig attached but no luck...

My back out rig came out and I double checked the stonfo connector.  The 13 metre line didn't produce any bites on red maggot, white maggot or caster.  I tried the 5 metre line, the same result, nothing, so back out with the bomb and a hair rigged 8mm pellet.

The match continued in this trend until the last 40 minutes.  Pikey next to me had one carp on the bomb and one small roach.  Shedful was starting to get regular fish at 10-13 metres.  I hadn't blanked since my Piking trip in February and I didn't want to blank on a MFS match!

The all-out was called and I'd had a tough day, but so had many of the other anglers.


Conclusion
I should have gone for the silvers a lot earlier.  I tried to make a big fish count, but it just didn't happen.  With a couple more of those large skimmers I could have moved further up the field.
Match Fishing Scene (MFS) Matches Willinghurst
Location: Guildford Rd, Surrey, UK