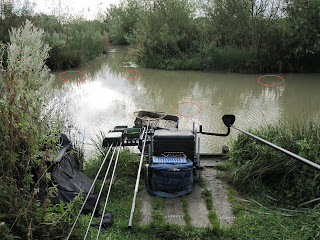 After 2 months of not fishing due to work commitments I finally got back on the bank and visited my first really local venue, Carrs Angling Lakes, just off Letch Lane, Stockton, before you reach Carlton Village.

After chatting to a couple of local gents and walking around the Match Lake I decided to fish Peg 17.

Set-Up
It was a comfortable 14 metre reach to the islands in front of me so there was no need to break out any rods.  While plumbing up I found that the bottom of the far shelf was a consistent depth of around four and a half foot, so one rig for my selected swims which were:

Bait for the day was Corn, Pellets and a pint of white/red maggots.

Indications took around 30 minutes, the water was flat calm and finally the float buried and the 4mm expander pellet had been taken by a lovely conditioned stock carp of around 2.5lb.

I topped up the far bank lines.  There were plenty of large fish crashing in the cut that runs between the islands.  The fish obviously know its safe up there.

Bites weren't coming on a regular basis so I switched to double red maggot on the hook.  The change brought an instance response from of course the silver fish and a nice ide came to the net.  I was rotating my two far bank swims but was having more success on the left side.  A change in feeding pattern was also required and I started to pot in 4-5 maggots every drop in and then follow down with the bait.  A bite would happen after a few minutes, if not a quick lift and drop to entice a response.

The owner came around and I had a good chat with him.  He mentioned that weights had been down overall in the past couple of weeks and also that he was looking at getting the cuts between the islands filled in or blocked off. 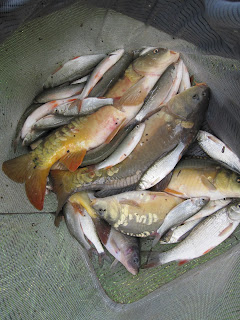 As the morning turned to afternoon the left hand-side swim died off and the right hand-side swim started to produce some quality silvers including a bonus barbel.  It was clear the fish were gorging on the maggots as everyone that I caught had a mouthful of red and white maggots.

The carp simply weren't showing, with only one in the net I decided to stick with catching silvers and to enjoy the day.  As the afternoon wore on, a slight wind picked up and a ripple appeared on the water which in turn switched on the carp.  The next bite saw a large fish take a large amount of pink hydroelastic with it up the cut between the islands which I thought would never come back.  It did eventually and after a 15 minute battle I finally had it netted.  A lovely 6lb mirror carp.

I continued the session and managed to snare another 6 carp, mainly stock carp up to a 1lb and one other fish of around 4lb.

Result
An estimated 16lb mixed bag of carp and silvers.

Conclusion
Fishing on the match lake had been hard according to the owner that day so I was very pleased with my  catch.  Carr's match lake, a great pole venue, the lack of ripple on the water had an effect on the day I think.  The cut's between the islands does harbour a lot of fish in a kind of sanctuary.  The lakes while commercially cut from the earth are very natural in their surroundings and a peaceful place to fish for the day.
Carrs Lake