February 15, 2013
The first outing of 2013 after a 3 month winter break.  I'm sure I'm becoming a bit of a "butterfly" angler and only coming out in the good weather... that or I'm just getting older and feel the cold more??

Since Mark and I only had 6 outings in 2012 it's not really fair to call the years winner despite being 2 up on him overall ;-)  So we decided that a 3 day fish off would determine the Mark vs Mark 2012 Champion.  As I would be driving down from the north to Cambridge for the weekend we picked a fishery that was midway between us and find ourselves at Diawa's Hallcroft Fishery, a fishery that neither of us had any prior knowledge of.

We decide to fish Canal lake and teh tackle shop mentioned that pegs 11 & 12 where fishing well.  Mark chose peg 11, missing peg 12 as it was full of ice, so I sat on the peg 12 and proceeded to clear the ice.  It was only thin so didn't take too long to cut a path.

Bob Poole had given me a heads up that peg 12 was the peg to go for but I failed to tell Mark this, sorry mate, they did tell you in the tackle shop ;-)

The Set-Up
The Canal at Hallcroft is about 14.5 metres wide, so today would be pole only.  I decided to target the channel with two swims at 10 o'clock and 2 o'clock, one would be fed aggressively and the other very negatively.  The depth was pretty uniform at 3 foot across the peg, making one rig for all.

Bait for the day was simple maggot (alive and dead) and soft hooker pellets. 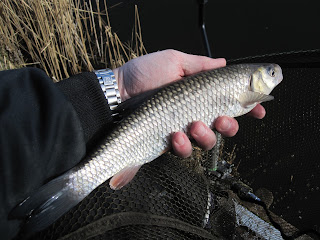 We were ready by 9:15am so I disappeared off to the cafe to grab us both a bacon and egg buttie.  The buttie's were very good, great bacon and the eggs were properly cooked, very runny and a fresh cob bun, highly recommended.

Kicking off at 9:30am, we decided to fish through to 3pm to decide the first day of our three day competition.

After an hour, Mark and I were biteless... it was about this time that we had a visitor, namely my insider to the venue, Bob Poole.  Bob advised us to try further across in the shallower water as the carp did tend to back off up the far bank and with the sun on the water, the ice clearing quickly maybe they would be feeding there. 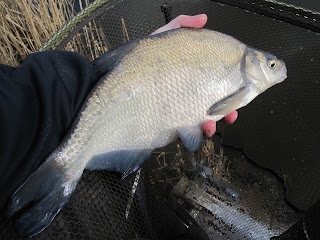 So both Mark and I changed tactics and set up a 14.5 metre rig with about 2 foot of depth.  Bob disappeared after giving us some good tips and trick and we carried on fishing... neither of us had a bite and the time was ticking on, we were both pretty concerned that a potential blank was on the cards.

Finally, around 1pm my float dipped on the fair bank swim and a small chub came to the net.  This was a great relief to me and started to put a little bit of pressure on Mark.

After another hour, neither of us had anything else, today could be a disaster!

2pm, I decided to try my negative line in the track, feeding 4 maggots and dropping in a dead red after them, the float went and a nice skimmer came to the net.  It was soon joined by another and then the carp moved in... Every drop in I was getting a fish and so I upped the feed in the softpot to keep the fish there...  Carp after carp was coming to the net, although I foul hooked and lost a couple of fish.

The Result
By 3pm I had 13 fish, 3 silvers and 10 carp and had beaten Mark.  We fished on for another 30 minutes and finally Mark hooked and landed a carp.  I managed another 7 carp.  The win had been secured by me, so putting me 1 up for the weekend.

Conclusion
Winter conditions and negative feeding were the order of the day, but we both felt that the fish just weren't in the area until later in the day as they had moved down the canal.  Luck for me they stayed in my peg and to Mark's frustration never moved to his swim...

Bring on tomorrow at Lawn Farm, the pressure is on Mark to tie the weekend.