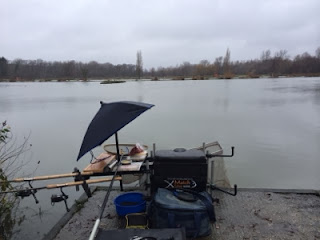 2 months since I was on the bank so I was itching to get out and about, so with no local MFS matches I decided to get my butt to Gold Valley in Aldershot.  The weather has turned very cold, there has been plenty of rain this week and I've heard that Gold Valley has been fishing hard recently so I wonder what today holds?

The match today is on Gold Lake, Canal bank and after speaking to a couple of people, Marcus Page and Brian Green I knew that it would be a tough day and luck to drawn on the fish...

The Draw
Only 11 of us fishing today and the weather was pretty miserable although the car temperature was reading 10 degrees.  I drew peg 24 which was an end peg, but at the unfancied end of the lake, typical!

John allowed us to drive to our pegs which was greatly appreciated and made life a lot easier.

The Set-Up
I decided after looking at the peg and with the wind that today would be a bomb and feeder approach only.  So I set up two identical rods one with a 1oz bomb and the other a drennan cage feeder.

Bait was simple today, dead red maggots, soaked 4mm/micro pellets with a little bit of groundbait, 8mm pellets, sweetcorn and worms for a bait change.  I had also made up a few PVA bags of 4mm pellets.

The All-In
I had clipped up the bomb rod short of the centre rope and the feeder rod 3/4 to the rope.  When the all in whistle was called I put 3 large feeder loads of pellets and groundbait with a couple of dead reds on the 3/4 line.

Hour 1 - Bomb line, baited with double sweetcorn and a PVA bag, left this for 40 minutes with no signs of fish either bites or line bites.  The next cast I tried an 8mm pellet and PVA bag.

Hour 2 - Switching to the feeder line, swapping to a small drennan cage feeder, double red maggot... nothing, recasting every 20 minutes...

Hour 3 - Replacing the feeder with a small bomb I started to cast around the 3/4 line... the tip final moved, looking up I was disappointed to see a duck crossing my line...

Hour 4 - I went back out on the long bomb line and tried a pop up white boilie... no luck, nothing at all... this was a tough day.  The guy next to me brought in his first fish, a small skimmer.

Hour 5 - desparation had set in and I opted to try a close in line with double corn... nothing, nada!!!

I was glad to hear the whistle for the all-out

The Result
4 of us blanked, myself including Mr Rhodes who I had a pound with, so neither of us had to pay out.  The match was won from the first peg on the canal bank with 63lb of carp.  Next weigh was around 25lb from memory.

Conclusion
It was a tough day and my second blank since starting fishing again.  It certainly reminded me of the mantra, "It's called fishing, not catching..."

Still I wet a line and got soaked in the process...  until next year!

Unknown said…
Unlucky mate, apologies i couldn't come out and say hello! Went to tackle shop tho, looked over at u all in the rain and thought..... I will see them soon lol! Great read as always, all best and have a great Xmas and new year matey :)
21 December 2013 at 18:53