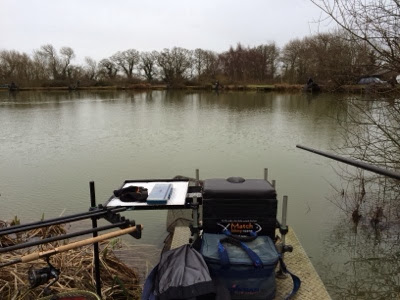 The first match of 2014 and its the MFS Champions League match at Lakeside Fishery.  I was looking forward to seeing the usual suspects at this match particularly as some of the 'characters' were here today... aka Pikey, 76 Trombones, Shedders and Colbrad to mention a few!  18 of us were fishing and the weather wasn't looking the best.  Hey Ho, I'm back on the bank so not too bothered.

Finding the fishery was pretty simple, providing you put the right location into the SATNAV eh Ron? ;-)  I made a bit of a boob by leaving my trolley handles back at the flat car park.  I must have reversed over them and not noticed.  So it could be a number of walks around the lake with my gear.

The Draw
Carl used his girlie shopping bag, the monies where paid by everyone and the draw started.  My dip into the bag produced peg 7 which lucky for me was close to the car, but unlucky for me, the wind was blowing at me and across me... it would be a cold day ahead.

The Set-Up
The pole would be my main lines of attack backed up with a small feeder to go on the long pole line if the wind was too much.  I set up the following lines:

Baits for the day, dead red maggots, casters, a small tub of worms, sweetcorn and some sweet F1 dark groundbait.

The All-In
The whistle, or Carl's loud voice started the match.  I fed a single ball of groundbait on the 13 metre line and the 6 metre line was easy enough to feed by hand with caster.  Starting on the 6 metre line with a single dead red the float settled and after lifting and dropping it stayed up and a fish was on and soon off again!  It was a positive sign, or so I thought!

After a hour of feeding 6-8 casters on the 6 metre line, the wind got up and I didn't have any fish in the net.  My hands were damp, cold and numb!  Ben next to me had called time and was packing up.  I popped to the lodge to warm my hands over the kettle.  Returning to my peg, I could not fish the 13 metre line as the wind made it to hard so I dropped the feeder over this line and sat on my hands to warm them further.

A number of casts, another hour and nothing, not even a line bite!  This was like the previous match I fished at the end of 2013 at Gold Valley... please not another blank I thought!

I was still feeding the 6 metre line with casters and so decided to give it a go with a segment of worm.  The float went, resulting in a small Perch.  Well, at least I haven't blanked!  This pattern followed over the next 90 minutes resulting in 6 small perch and 2 small roach.  The swim then died, to be honest, it was exactly alive and kicking in the first place.  Trying beyond my feed didn't give me any results.

The final hour and I noticed that Pikey had landed a nice skimmer on the tip, so I decided to spend the final hour holding out on the tip for a large fish.... it never happened!

The Result
8 fish for 14oz... not exactly brilliant, but it secured me 3rd in section for four valuable Champion League points!

Conclusion
A very tough day with a few of the lads going home early.  The weights show how hard the fishing was so I didn't feel it was a wasted day.  It was definitely great to get back on the bank and it also showed me that I was slightly disorganised which will be rectified in the next couple of weeks.  Next outing, this Sunday at Lawn Farm with Mark to start the 2014 M vs M competition off...
Lakeside Fishery Match Fishing Scene (MFS) Matches
Location: Cublington, Buckinghamshire LU7 0LF, UK