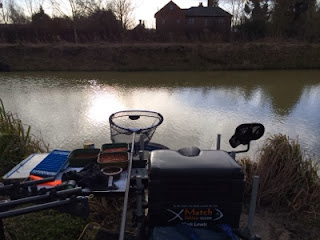 The Set-Up
I'd been on this peg before on the How End two dayer and managed a second on lake, so I was confident in the approach.  The local lads had role me that the fish were showing on the other side of the lake this winter, where Mark was... this could be a tough battle.

So two rigs would cover me today:

The All-In
My neighbour for the day would be Baz and we agreed to a pound between us, I think the pound scores are all tied.  Baz, on Peg 12 had an open margin and plenty of water to get at, but my confidence was high. 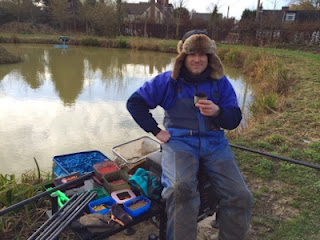 Baz called the all in and I had decided to opt for a negative feeding approach today.  Shipping over to the fair shelf and dribbling in 6-8 pinkies I set my rig very expectantly.  The wind was ok, sometime difficult, but ok, the sun however was making it difficult to see the float.

During the first hour I was trying across the far shelf but it was very difficult to present the bait and see the float so I came short.

Hour 1 passes without a bite and Baz next door had landed a skimmer.

Hour 2 - I try down the track, nothing, Baz lands a nice carp after a pretty long battle on light gear.

Hour 3 - I'm starting to worry and had tried all over my peg, replumbing lines and even potting in some bait to see if I could get any fish to settle.

Hour 4 - I try the margins and go right over to the far bank.  More replumbing and still no bites.  Baz is putting some nice carp in the net and I'm well behind.  The lads on my left are catching and I'm facing a blank!

Hour 5 - I finally get a bite and bump the fish... spend the last hour shivering, but still trying...

The all-out is called and I've not caught a thing!  Mark only needs 1 fish to take the point.  I give Baz his golden nugget.

Conclusion
Baffled!  2014 is not starting well, next stop is Stafford Moor and I need to get into gear for that week.  I tried everything, presentation was tough at time, I just couldn't get anything going and by anything going I mean biting let alone catching!  Never mind, there is always next time... Sorry Pebs and Brian whose team I was in...
How End Fishery Matches
Location: Houghton Conquest, Central Bedfordshire MK45 3JT, UK