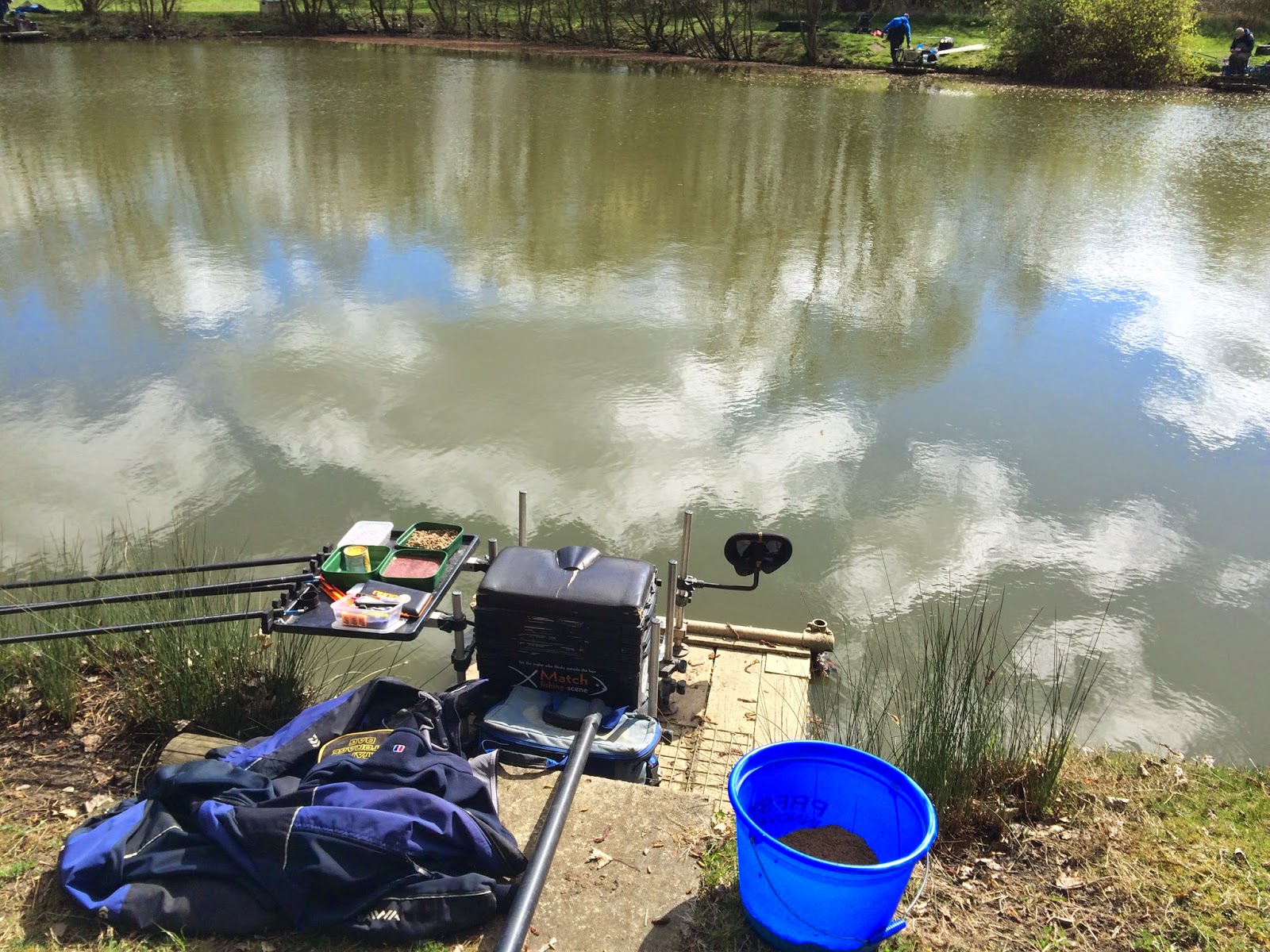 Last time I fished Rolf's was back in May 2012, the lure of the large carp this lake holds was too much to resist.  There would be 26 of us fishing today, plenty of regular faces and new ones too, all run by Herbie, he of Stafford Moor, "Herbie is our leader" fame.

The weather in the run up to the match had been warm, so the expectation was that the carp would be feeding.  I met up with Shedders at the services for a coffee before heading to the match, it was good to see Herbie, Coling Merce, Doddy and Bilo who where also there.

Getting to the fishery, the car park was full which is alway great to see.  Pools money paid and John recommended 4mm pellets as feed and 6mm pellets as hook bait.

The Draw
More like a scrum is a better way to describe it this morning.  I drew peg 37 which is on the left side of the lake with open water in front of me.  Shedders had mentioned he wouldn't like to draw in that area, luckily he drew peg 40, just run the corner from me.

My section consisted of Ross, Colbrad, Alan B, Shedders and Pikey.

The Set-Up
I didn't pack any rods today, given the result, maybe I should have!  Pole lines set-up at:

Bait was fishery pellets, 4mm and 6mm, some corn and dead red maggots

All-In
After speaking with John Bennett, fishery owner, he advised that a steady approach to feeding was the best foot forward.  So with that information I kinder potted in some dampened 4mm pellets and lowered in te banded 6mm pellet above it.

30 minutes past after much lifting and dropping, dragging, etc to induce a bite... nothing...

1 hour past, the 6mm banded pellet still on, looking very bloated yet a tasty morsel for any carp or bream in the lake, still nothing.  The float dipped and in comes a gudgeon... wow I thought.

The lads around me weren't catching either.  Pikey had netted a carp from the off but that was about the only action around the lake.

Colbrad next to me was on the pellet and bomb line and had a lengthy tussle with a lovely 14lb carp.

90 minutes passes and I decided to change to double dead red maggots in an attempt to get some fish in the net.  Float dinked and a small roach made an appearance.  A few more fish on this line all silvers.  Shipping 13 metres of pole for small silver fish is no fun, so it was time to try that shorter line.  I cupped in some 4mm pellets and groundbait on the 13 metre line to see if I could force any fish over that line.

The short line produced another silver fish and then went dead???  Next option I thought, well, the margin line was looking tempting, so a couple of cups of groundbait went in on the platform to me right and over I went with about 10 dead red maggots.  A couple of dinks, which I assume where from smaller fish, no major bites... the day was becoming very frustrating.

After an hour of messing around on the short and margin lines, it was time to try the long line to see if anything had settled over it... err, that would be a no.

Large carp where cruising around just below the surface so I grabbed another top kit and set up a small drennan dobber flat and went dobbing / shallow fishing for an hour.

Menatime, Alan next to me was catching silvers on his short line and had pulled out of a larger fish.  Colbrad had bagged another carp fishing paste, Ross was catching squirrels and some carp in the corner.  I couldn't see what Shedders was up too, Pikey had another carp and Bilo opposite me wasn't catching either although he had bagged a carp shallow.

With 30 minutes to go I had no option but to hold out for a larger carp as Alan next to me was well ahead on silvers.  The only place I had any confidence in was the margin line.  With 5 minutes before the all out, fry erupted around the platform and a large bow wave made it clear that a large carp had exited the area... All out, oh dear...

Result
8oz!, yes you read it right, 8oz... at Rolf's, home of the large carp!  Lucky for me there was one angler who only weighed in 1oz, sorry Colin K! Putting me second last on lake and having to give up a quid to Shedders!

Conclusion
Well, I was at a loss as to what had just happened... should I have brought some rods to try the bomb and pellet line?  Should I have fished shallow for most of the match?  One thing is for sure, at least we had a laugh, especially when I pulled my net out for the weigh in! 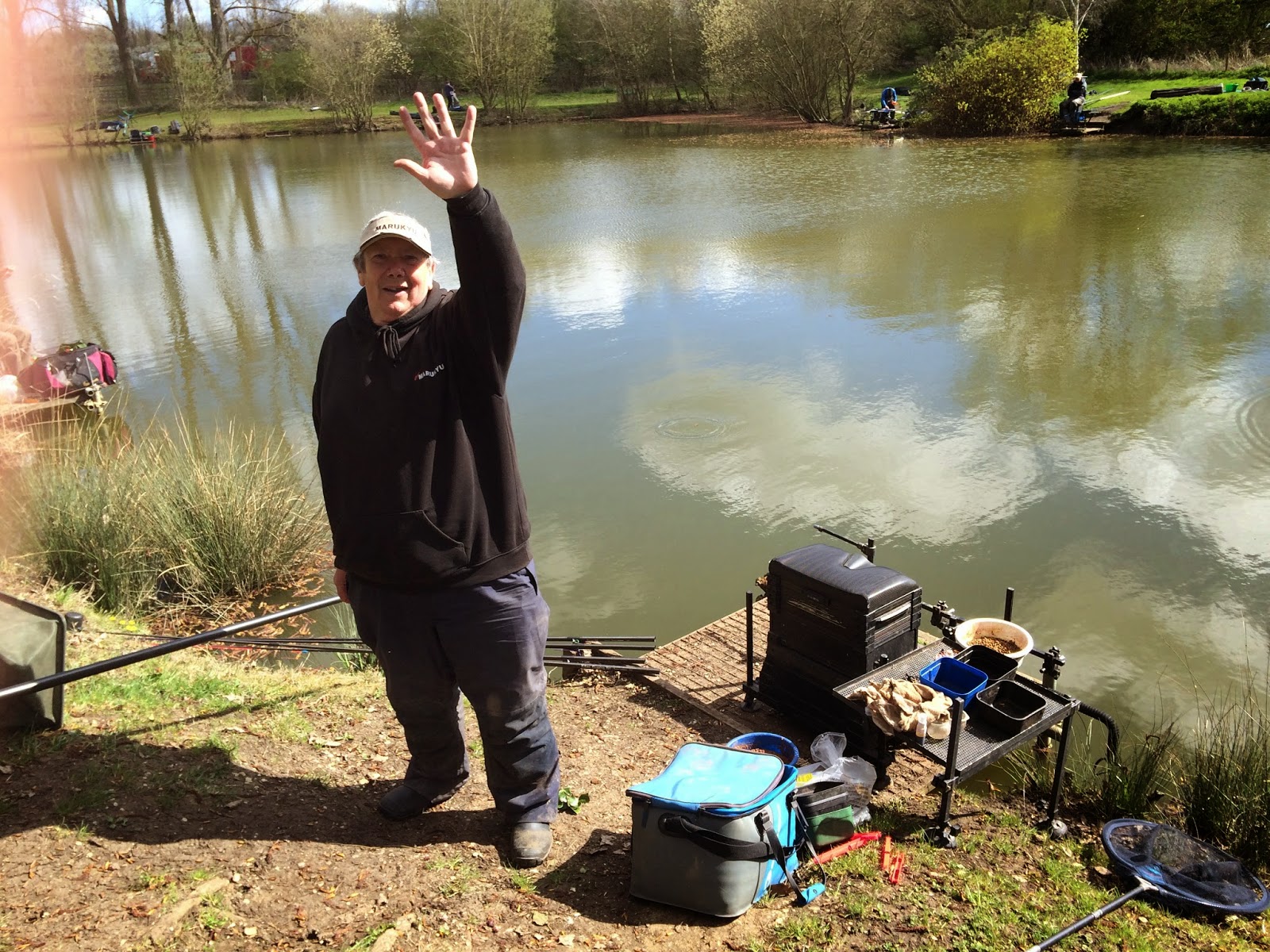 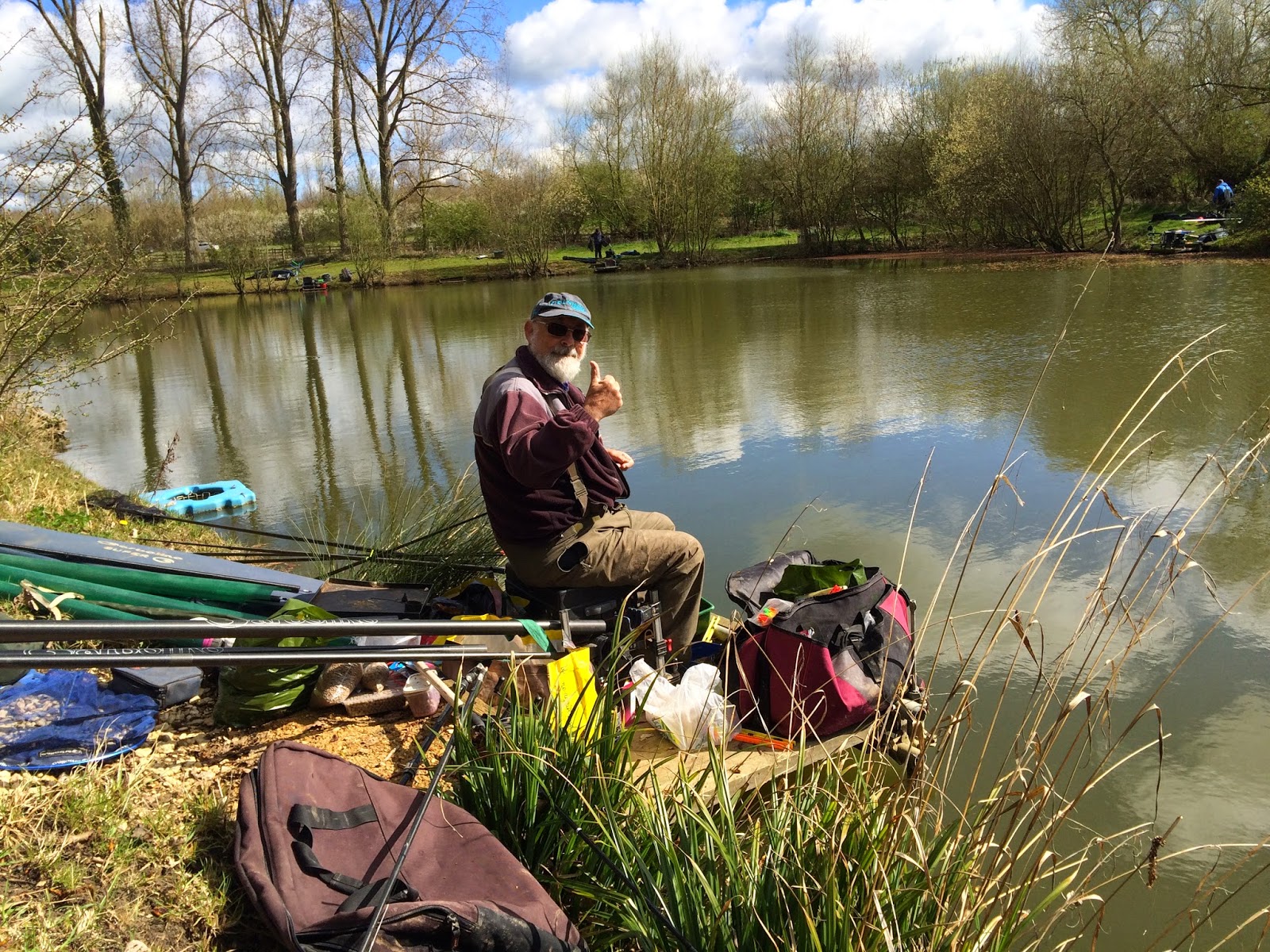 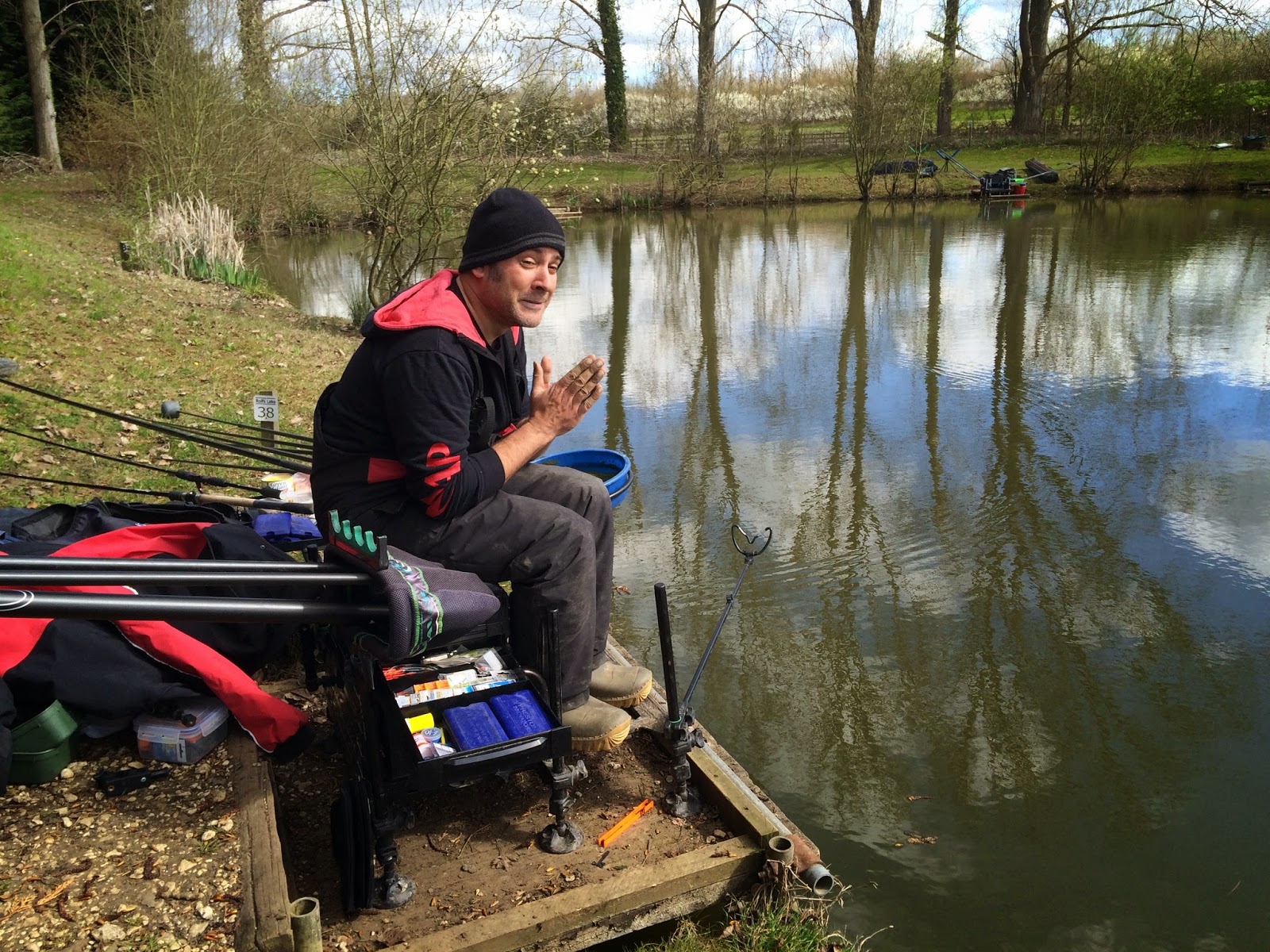 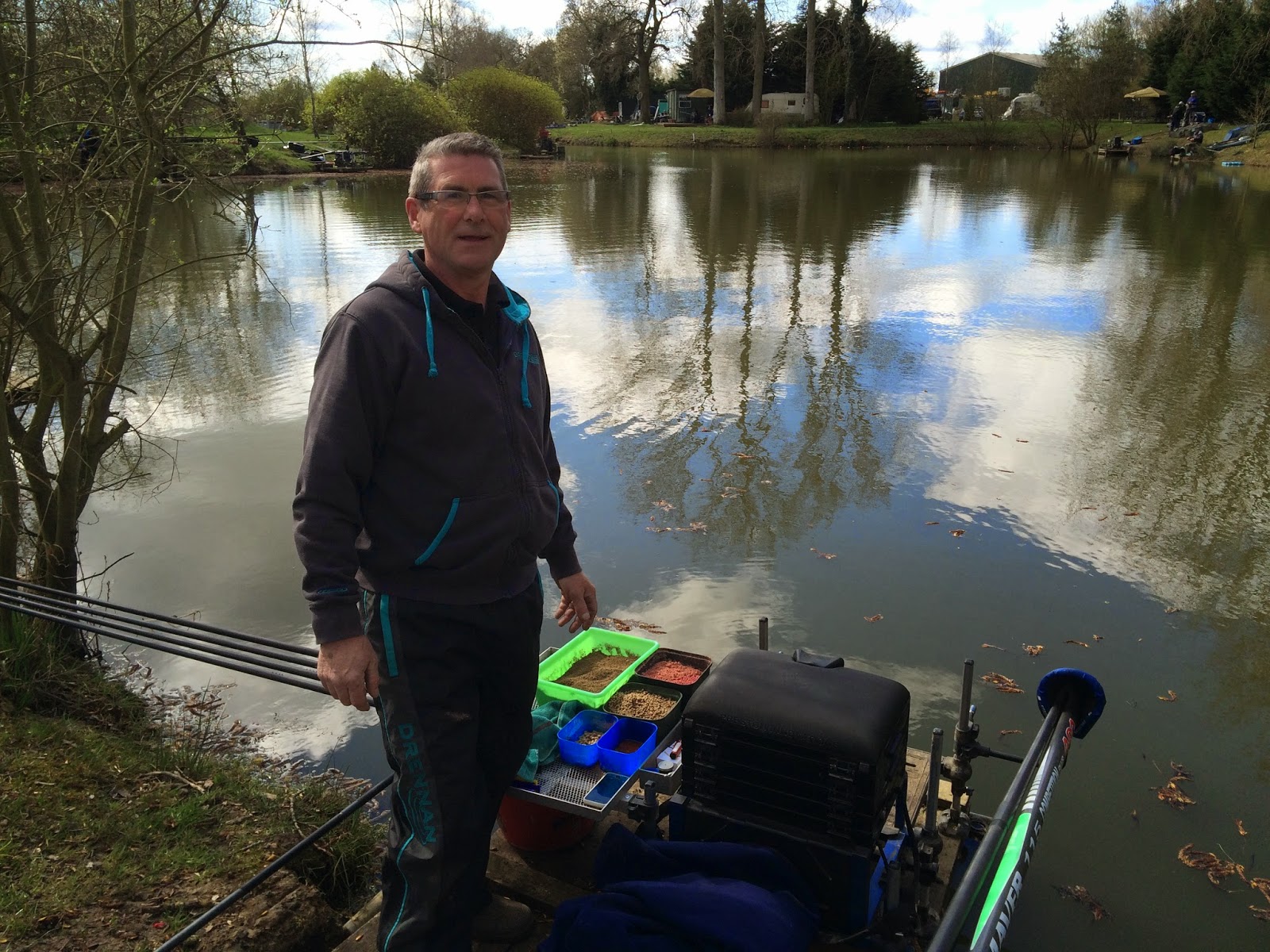 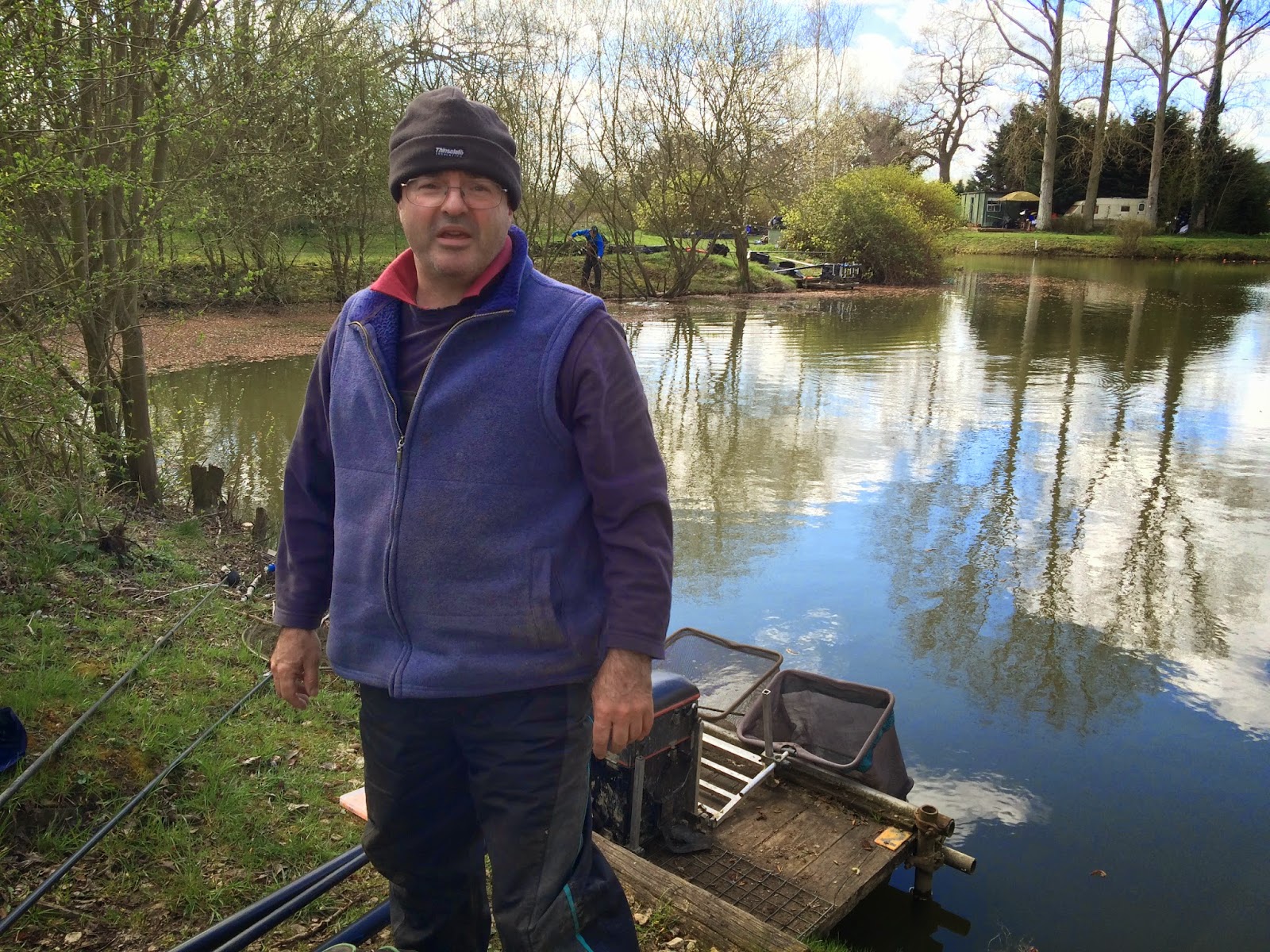