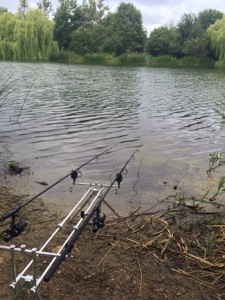 Finally Mark and I get to resume our mini competition but this time rather than match fishing we decided to go in the
hunt of large carp.

It was back to the venue where all of it started, Blue Bell Lakes in Peterborough.

This would be my first time with the rod pod and buzzers and I was hoping to use a bit of my match knowledge to winkle out a few larger specimens.  I would also be relying on Mark to be my teacher for the day.

Mark had kindly brought all the bait needed, boilies, hemp, maize, pop-up's and also had prepared some rigs for me.  We met at the fishery at 8am and it had changed since out last outing in 1997.  The small portacabin had been replaced by a custom built shop / come garage for the owners bikes, it looked fantastic.

Blue Bell Lake was our pick for the day and as the wind was blowing down the lake we took the 3rd and 4th swim's on the left side of the lake.

Set-Up
Now I can normally set-up my match gear quite quickly, so you would have thought that setting up a rod pod, 2 rods and a spod rod wouldn't take too much time at all?  Well it was about an hour by the time I was ready!  The gear is certainly not dainty!

I set-up the spod rod with the float marking kit, it would make one hell of a big pellet waggler I thought!

I found a spot of gravel around 5 rod lengths out which was around 8 foot deep, so this would be one of my lines.  The other line would be my left hand margin.

Mark helped me to measure out the now clipped up spod rod on some bank sticks so that I could ensure the first rod was clipped up to the same distance and area.

The Session
I started by putting 6 spods of corn and hemp with a mix of left over groundbait over the target area. The rod to fish this area was set up with a simple fixed lead rig with a 16mm boilie and a PVA string of 5 other boilies.

The margin line I threw 6 handfuls of the spod mix and dropped my helicopter rig over it in an area that was clear of weed.  Mark also decided to fish mid way across the lake and drop a rig into the margin.

I decided to leave the rods out for an hour which was quite an alien concept after match fishing where you are constantly busy.  Grabbing my very comfortable chair I sat with Mark chatting and sorting out rigs.  After 20 minutes Mark realised that one of his rigs that he had also tied a string of boilies too wasn't attached with PVA string, but rather rig floss which doesn't dissolve in water!  We were chuckling away as he brought the rig back with a load of boilies still attached to it!

We noticed that there was quite a bit of activity on the far bank near a large willow tree and I was getting a bit edgy that my rigs had been in the water for over an hour now.  The temptation proved too much.  Grabbing the rig that was in the margin the long cast was quite simple with a heavy lead and powerful rod.  To my amazement I managed to stop it just short of the reeds, so clipped the rod up and put it back down on the rod pod. 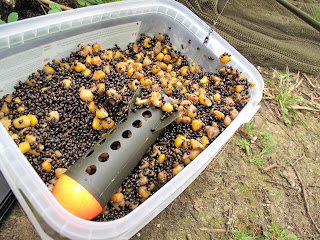 Another couple of hours went by, I had topped up my close line with some more spods of bait and decided to change the boilie hookbait to three large pieces of maze.


It then started to rain quite heavily, so out came the umbrellas and the rest of the gear got a good soaking!  Well it needed to be christened somehow.

Once the rain had past and the sun came out once again I could see a large fish which definitely wasn't a carp cruising near the surface.  It was circling in our area and we guessed it was a Pike due to it's shape. 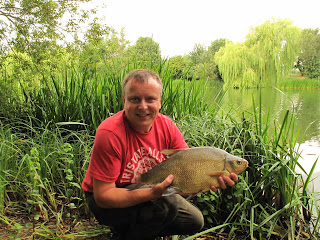 Mark changed one of his rods to a zig rig which is a rig with a long trace and a pop-up bait that is fished anywhere from a foot above the bottom to near the surface.

It was then that we noticed a large black mass of fish in our swims.  We had noticed some fish topping and they were infact large bream rolling on the surface.  It was then that Mark's bite alarm went off, not with a single run, but multiple "knocks".  We surmised that it was line bites until Mark picked up the rod and it was fish on.

A lovely large Bream came to the net that was 5lb 10oz.  At least one of use hadn't blanked! Grabbing some pictures and returning the fish, his other rod goes off, this was the bait on the bottom.  Another large bream comes to the net.  He let the fish go in my swim as it was easier, as he approach the water there was a massive splash from a large carp that was in my margin swim... miss the opportunity on that one!

Within the space of 30 minutes he had landed, well, I had landed for him as his "net boy" 4 large bream! 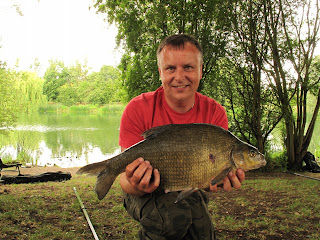 I went back to my rods and quickly tied a rig zig on one of the rods.  BEEEPPP, another fish on for Mark!  "Net Boy" he shouts, cheeky blighter!  Another Bream!

We decide to fish until 4:30pm and that time was approaching quickly.  The amount of large bream in the area was an amazing sight to see.  All I got for my efforts was a couple of line bites.  The long line out to the otherside of the lake hadn't produced anything at all.

Result
Mark took the win easily with 7 lovely big bream ranging from 4lb 8oz to the largest at 6lb 10oz.

For me, it was a blank and only a couple of beeps from the buzzer to show for the day!

Conclusion
Mark's switch to the zig rig started his run of fish, by the time I'd set one up he had four fish!  I was very surprised that my long line across to the reeds on the far bank produced nothing, especially given the carp activity there!

It was great to see such a large shoal of big bream and even better to see Mark pulling out some great examples!  It would have been fun on a light waggler rod, that is for sure.  Anyway, the gear has now been "wetted" and I realised I'm missing some terminal tackle which has now been ordered ready for our next outing in a couple of weeks time.