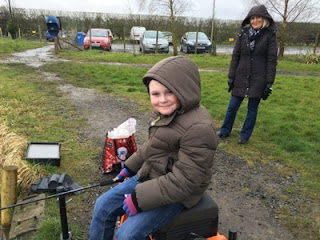 There have been quite a few articles about needing to get young people involved in Angling, so when asked if you'll take someone fishing for the first time, how could I refuse?

The New Fisherman!
So, it was Samuel's 7th birthday and his Mum, Lianne was asked by Samuel if he could go fishing.  A quick message on facebook and we sorted out a date when I'd be back in Teesside to get him out on the bank.

The Gear
Where do you begin with regards tackle for a new angler?  Well Korum provide some great kits for beginners, a float, ledger and pole outfit.

I decided to get the Korum Float Pack Starter kit.   The only change I made was replacing the 6lb line for some 4lb line which I had plenty of.

Fish safety is number one, so I grabbed an old landing net head and handle to add to the kit and some other floats, shot, a towel, rod rest, bank stick, some more ready made hooklengths and bait tub.  The gear was ready!

The Venue
We needed a venue that was local and was stuffed full of silver fish with the chance of a larger carp. Renny Lakes in East Harsley was the perfect location.  I'd taken my two nephews there quite a few years ago with great success.

The weather wasn't ideal, apart from an overcast day.  Arriving at Renny Lakes we fished the pond closest to the car park and picked the peg on the point with the wind off our backs and the trees behind us offering some protection. 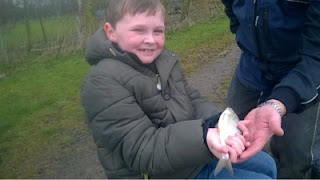 With lots to take in we set up the 10 foot rod with a simple insert waggler, plumbed up the depth, with a single number 6 down the line, put on a hooklength.  Bait was a good old half pint of mixed maggots with a single maggot on the hook.

Casting was a simple swinging out of the rig, then feeding 4-8 maggots.  The bites were instant and within a few minutes Samuel had his first ever fish, a lovely little roach!

We worked the float, leaving it settle for a few minutes and if no bites, recasting

The next few fish followed very soon after, before we knew it, the fish counter was on 7 fish.  Samuel declared he'd like to catch 10 fish.  OK, 10 fish is the target.

There were some other anglers on the lake and they weren't fairing so well, infact Samuel was bashing them up with the amount of fish he had. 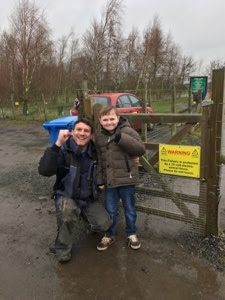 We reached our target of 10 fish in no time.  So, the next target was set at 15 fish.  The swim slowed a little, so it was time to break out the sandwiches while I adjusted the shotting and added two number 8's down the line rather than the number 6 to slow the fall.

We also tried a bit further out as the fish may have backed off slightly from all the action.  Sure enough we got back in touch with the fish, firstly with a small rudd and then some better roach.

Breaking the 15 fish target we set our sights on 20 fish and then we would call it a day.  The guys near us already had.  Sure enough, after 3 hours, Samuel had caught his 20 fish.

Packing up and getting to the car before the heavens opened.

When his mum asked him how the day was the response was perfect, "today has been one of my most favourite days ever!"
Renny Lakes

Matty Johnson said…
Brilliant read Lewy! What a first session and hopefully the first of many for him!
4 April 2016 at 15:37

Anonymous said…
Samuel had a great first fishing experience. Thanks Mark, you were very patient with him, a great instructor.
4 April 2016 at 18:12