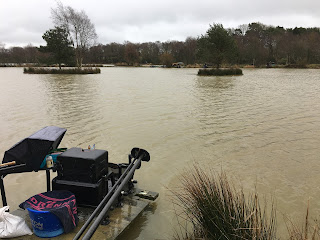 Day 1 of the MFS Silvers festival at Stafford Moor fishery.  The weather on the previous day was pretty horrid and the forecast wasn't looking any brighter but spirits were high amongst everyone.  Herbie gathered us all in the tackle shop at 9am for the draw and to outline the rules.  We would be fishing from 12pm to 5pm so plenty of time to set-up.

The Draw
Today we would be drawing for either Tanners, Woodpecker or Pines as Oaks had been taken out due to a large amount of carp caught yesterday.  Peg 9 on Tanners for me today which meant a very easy walk from the Lodge of Plenty.

Peg 9 in on the lawns side of Tanners and the peg could be classed as the point.

Set-Up
The previous day an open was fished on Tanners and the guys were picking up large skimmers using an open ended feeder towards the island, so I thought I'd emulate this and set up a feeder rod.

Pole lines were 12 metres and 6 metres both straight ahead.  I had a margin line to my left too.

While the 6 metre line settled I started on the feeder about 10 metres short of the island.  After an hour I'd had a couple of carisio.  I decided to try the feeder for a bit longer but this time closer to the island.  That hour turned out a bit of a mistake.  The weather was extreme, hail stones, snow and high winds.

Time now to try the 6 metre line which started putting fish in the net.  I'd also been drip feeding casters into the margin swim.  I stuck to the 6 metre line until the final hour when I had a look on the long line which produced the same stamp of fish.  A quick look in the margin produced one bonus skimmer and then the all out was called.

Conclusion
Spending too long on the feeder I feel let down my weight today.  The margin I expected some other bonus fish but they didn't arrive.