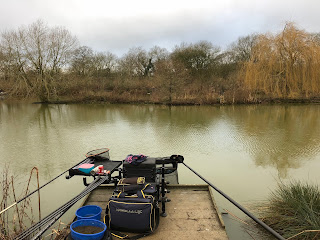 First outing for 2018 and some much needed practise ready for my week at Stafford Moor.  So today I was out with the MFS lads at Sumners Fishery, Horsham on the match lake.

My last visit here was back in 2012 however that was a carp match and I had a fantastic day recording my PB match weight at the time.

As usual it was great to see a lot of the lads I'd not see for a while despite much Mickey taking as I'd prepared a bacon sandwich for our match organiser Hathers.

The weather was pretty mild around 10 degrees with a gentle south westerly wind even though the day before it had rained for most of the day.

Set-up
Looking at my peg I decided to fish four pole lines, two would be fed negatively and the others positively.  So I opted for two lines at 14.5 metres at 10 o'clock and 2 o'clock positions, the other two lines would be at 5 metres.  I also managed to find the same depth on all lines so one rig would cover them all.

I also decided to setup my short 6 foot bomb rod with a tiny cage feeder that I intended to cast to the far bank in an attempt to pick up the chub that are in this lake.  Bait for the day was the humble maggot, casters and some dark F1 ground bait.

All-In
I decided that my left hand lines would be the positively fed lines and the right, negative, so cupping in 3 balls of ground bait on the left side and a single ball on each of the right.

In order to give the lines some rest I opted to go onto the feeder for the first hour casting regularly every 2-3 minutes.  The tip was bouncing after the first cast and once the hour had past I had 10 roach and one bonus skimmer around a pound however sadly no chub.

Checking my 14.5 metre right hand line there was definitely plenty of bites to be had with smaller fish taking the bait on the drop and holding the float up.  A quick change of the shooting pattern to a bulk and a single drop put me in touch with better fish.

Another bonus skimmer came to the net however my catch rate certainly could not compete with Dave's next door.

I'd been pinging in casters on my short lines so changed to these as shipping back 14 metres of pole for a small roach isn't much fun.  Plenty of bites on this line too.  With a couple of hours left to go I wanted to check my cooker lines to see if any large skimmers had settled on the feed.  The answer was no, just more small roach.

So I stayed on my two 5 metre lines until the all out and I'd be disappointed come weigh in time!

Result
8lb 8oz for second last on the lake!  Not good at all.  Congrats to Hainsey for the match win with 26lb 12oz caught on the waggler, whip and 5 metre pole line using maggot and caster.

Tiddler1 (Dave) took my section with 20lb 4oz which consisted of 168 fish!

Conclusion
Watching the other anglers on the lake it was definitely a fish race exercise with most feeding top two most of the match and following the fish out.

Did I make a mistake with the feeder?  Well it produced some fish plus a bonus skimmer however maybe I should have setup the waggler rod instead.

The cooker lines didn't produce anything special either however there were plenty of small roach to be had.

Luckily I'm at the fishery next week for more of the same, so my approach will be different.  Waggler rod if the peg allows, one cooker line at distance and then a rig for close in roach work.  Lets see if that makes a difference!