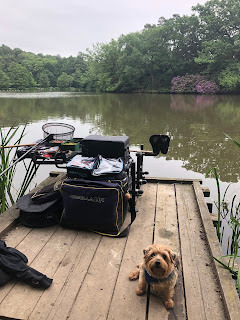 A Friday off work and a chance to have a pleasure session at Old Bury Hill Fisheries with Nathan and his Dad, John.  Button came along for the day too, she does really like birds which was to become apparent later in the day ;-)

I'd phoned the fishery and they had mentioned that the sport was good with plenty of bream coming out.

The Draw
We had 3 pegs next to each other, two with an island chuck and the other left of the island.  John picked his peg, Nathan took the end of the island peg and I ended up on Peg 34, I think.

Set-up
I'd decided that it would be a rod only day for me so I left the pole and all the other paraphernalia at home.  Two rods, one feeder and one waggler.

All-In
Nathan and John opted to fish two rods at once to try and snare an OBH carp.  They also fished a method feeder each.

I had my 10 foot bomb rod that could reach the island at a push however accuracy was going to be an issue so I decided to fish two thirds the way across with a simple but accurate casting.

The waggler line was a few rod lengths out and I balled in 4 babies heads with some dead reds and 6mm pellets over the waggler line which was slightly to my right, I'd leave this line until the last few hours, well that was the plan anyway.

Feeder line plan was 2 minute casts for the first 30 minutes, ensuring I got the tell tail "plop" of the feeder going in and not just crashing into the water, then onto 5 minute casts.  The first fish came after around 20 minutes and was quickly followed by 6 other fish, there size getting bigger as time went on.

Nathan and John had netted a few fish too.  My feeder line was getting stronger as the day went on getting a run of a few fish before they would back off and I would leave the feeder for 10 minutes which seemed to bring them back.

No feed was going through the groundbait, leaving only the double dead red maggots for the fish.  I switched the hook length and banded an 8mm hard pellet which improved the stamp of fish however it was clear that the fish were straight onto the hook bait as bites where taking less than a few minutes each cast.

The weather was very bright which is normally not the best of weather for the bream but they were obliging today!

Now Button, the dog, was quite happy watching the ducks swim by and I'd fastened her to my fishing trolley when a number of geese and their large babies walked past on the path behind me.  Button saw the bird and decided that she wanted a closer look, barking while running towards them.  The birds all took off in one direction, straight over Nathan's head, almost hitting him.  Oh how I laughed and was thankful Button was still on her lead!

I decided to give the waggler line a try.  First drop in with the float and a dip resulted in probably the biggest fish of the day however that seemed to be it.  I tried to fish over depth to hold the float in position as there was some tow on the lake but nothing which was very strange.

Jumping back on the feeder I dropped in on the waggler line and the tip wrapped straight round taking 6 fish in the 30 minutes.  I was tempted to fish on but 4 hours was enough for the day and what a day it had been!