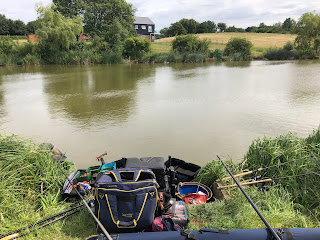 A very quite night in Bosworth and a cheeky curry with the lads.  The sunshine had definitely taken its toll on me.  A couple of pints and that was me done for the night and my lovely windowless room in the Bosworth Hotel beckoned.

The Draw
Peg 2 on Pool 1.  I've been here before last year on the Munkees vs Shandies match.  Very pleased with the draw.

Set-up
Even though I'd been on the peg before I decided not to fish the feeder across, instead I opted for a bomb rod to fish 3/4 over pinging pellets and to back it up the pellet waggler.

All-In
Given Neil's start yesterday on Pool 6 on the 5 metre line I decided to drop on that line first to try to snare an early few fish meantime pinging a couple of 8mm pellets over my pellet waggler and bomb line.

Well after 20 minutes nothing at all was happening, so it was onto the bomb and pellet line where I started to catch from the first put it.  Bites are really savage on this method with the rod wrapping round, most certainly, "fish on".

I fished this line for the next 2 hours with the fish being very obliging.  When the line did drop off I switched to the pellet waggler as it was quite clear the fish where cruising around the water.  This is when DumDum and I started a "lets see who can get closest to the boards with a waggler" competition.

DumDum certainly took the win after a few casts that ended up in the reeds he dropped one perfectly on the edge of the fair bank and was rewarded with a fish.

I took a coupe of fish from the pellet waggler line before trying the 5 metre line.

Well, the 5 metre line simply wasn't working just like yesterday.  I was foul hooking fish and just could not get them to settle.  After the match I had a chat with "my new best mate" Neil who told me he was feeding by the pot full to get the fish on the deck.

The margin line I had primed with a smaller amount of groundbait and pinging a few pellets over the line throughout the match and I was getting fish however I could see that DumDum was bagging fish at an alarming rate.  The whistle went and I didn't think I'd beaten Adam, the scales would reveal the results.

Result
104lb 6oz for third in section and having to give Dum Dum a golden nugget!

Conclusion
A brilliant two days generously supported by Neil of HillBilly Floats, well done to the top teams.  I don't feel too bad that I was chip shopped by Ruddy and NS69 on day one now.

I'm back to the Glebe in a few weeks time and I'm going to adopt a different method for the 5 metre line.  I'll report back after those matches if it worked.