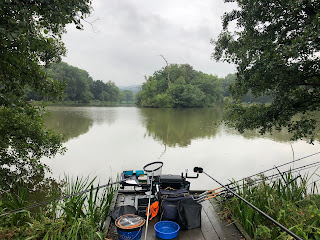 A facebook post from Hathers looking for some volunteers for the Wednesday retiree, self employed and builders match at Old Bury Hill made me put in a day of unpaid leave, its just too good a place to miss and the fishing was reportedly very good.

Arriving at the fishery it was raining and quite overcast, given our summer, rain was last thing on my mind.

The Draw
We all gathered round the cabin jostling for position.  Eventually my turn and peg 13 would be my home for the day.  Neighbours Hathers and Shedders, so plenty of friendly abuse to be had.

Set-up
My initial thoughts given the wind blowing across the peg was to sack the pole and just fish the rods. Choice of rods were:
I was setup very quickly and the weather was clearing so plenty of time to get the pole out and setup a line at 14metres.

Bait was mainly pellet and groundbait however I also had some casters, maggots and sweetcorn.

As we were all setting up, we heard a moan from next door, Hathers, he had left his reel handles at home... oh dear... he turned down the offers of reels from the lads and promptly disappeared home for a 90 minute round journey to retrieve his handles... what a knob! ;-)

All-In
With plenty of groundbait mixed I decided to drop 6 balls of groundbait together with half a pint of casters on the pole line spread in an approximate 1 metre square.

First choice was the method feeder at 50 metres with a timed cast at 5 minutes.  After 30 minutes not a sign although Hathers had returned from his round trip home to collect his reel handles...

I decided on a change and cast shorter with a method, again 5 minute casts.  Why change, well I could see fish getting caught on the pole lines next to me, plus Shedders had gone short too.  Not bites here either...

Hathers had setup now and he was catching fish on both his long line and short feeder line where he was pinging a few pellets over.  I decided that I needed to go long with the tea bag, go longer than the 50 metres I'd initially measured and clipped up at.

All the cast were being timed and eventually around the 5 minute mark the tip rattled round and the first fish was on.  The 5 minute pattern continued for 3 fish and then they seemed to back off however I'd decided to stick to the plan now.

Bringing the bomb and dumbbell back in from the distance chuck one time I hooked up on something else that felt a bit larger which I assumed would be a foul hooked fish.  It turned out to be a Zander that had nailed the bait coming back in.  My first ever Zander, an ugly looking fish too... and it didn't count towards my weight either...

I fished the tea bag for the rest of the match until the final 30 minutes.  I also ran out of tea bagged pellets, so a quick dash to the tackle shop to grab some PVA mesh and make up some new bags was required.  The fish definitely came in groups of three fish, then they would back off.  A yellow 8mm dumbbell was the best bait over an 8mm pellet.

The final 30 minutes I'd quickly topped up the pole line with a ball of groundbait and went straight over it with some sweetcorn at 14 metres.  The bite was instant and another good Bury Hill bream was in the net.  I had 5 fish in the final 30 minutes, lifting and dropping the bait proved the answer and the last fish was a cracking fish of around 3lb.

Conclusion
I should have stuck to my own plans at the start of the match rather than chasing the fishing that I could see getting caught around me... plain and simple.

I had a pound bet with Shedders which I won however I stupidly traded that pound to Hathers how just about doubled my weight which considering he started late was an excellent run.

Should I have gone on the pole earlier?  It wouldn't have harmed having a look see especially as my run of 5 good fish in 30 minutes probably doubled my weight.