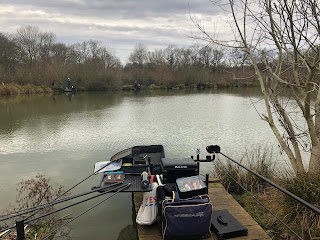 With a great bunch of lads and just down the road it was too good to resist particularly as it would make great practise and preparation for Stafford Moor silvers at the end of Feb.

The Draw
Temporary peg 20, the first peg on the right hand side from the car park, right next to the "wedding platform".

Set-up
After getting some tips from Hathers and with the wind blowing straight into my face I set up the following:

Bait was very simple, maggots, casters and a small amount of worm.  No ground bait mixed at all.

All-In
The plan was to exploit the whip line for the first hour and then to strategically take silvers from the margin and 6 metre lines.  It didn't quite work that way.

The wind in the face was a pain but I soon got into a rhythm with the short whip and before long was hooking some of the lakes smaller silvers together with some better fish too.  The first hour of the match pst very quickly and the whip was performing well even when some better fish had been hooked.

I'd gone through about half a pint of casters too, luckily I had brought two pints with me.  Next put in was most definitely a carp and there was no way the whip would bring this in as it started to move off.  Another lucky stroke and the hook pulled.  I was using a gamma green fin wire hook that I've used since getting some great advice from a certain Mr Haisman (RIP mate).

Hour two and the whip line was slowing so it was time to try the longer pole lines.  I'd been dripping some casters into the margin swim so that was the first place to try.  Micro perch followed... not ideal so a quick change to the other pole line and straight into a large lump of carp. 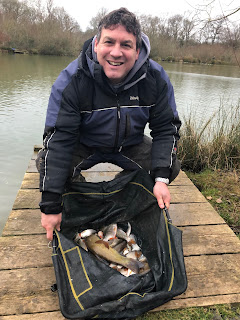 I landed the carp much to my surprise, it was certainly well hooked.  So the next hour I found myself scratching round for bites so I decided to keep trying the whip line which was still producing fish although not as quick as earlier in the day.

Still struggling through the last hour, while still catching however no longer a rhythm, the margin finally produced some fish, namely a lovely tench which would boost my weight.

Conclusion
Well, I had enjoyed my day on the whip.  It is great to be in much more direct contact with the fish and the whip gives you that.  While I felt I had an ok weight I was disappointed to find I was 4th in the section of 5!

I've got a match in a few weeks time, where carp count and there is also a silvers pool... I'm tempted to fish that match purely for the silvers to see if I can improve my results however I feel that the three match series I'm well out of contention for any decent placing. 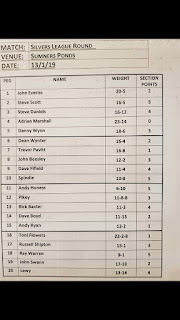