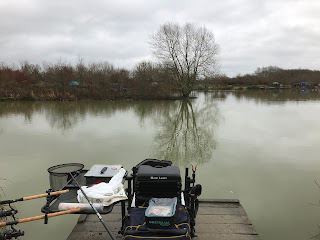 Match two of the three series silvers league organised by Ricky Baxter. Great to see all the lads and the final time to get some fishing in before the week that is Stafford Moor!

The Draw
Peg 6, on the left hand bank with an island chuck for me today and the wind off my back unlike the poor souls over the other side of the lake...

Set-Up
Waggler and bomb rod for across. 3 metre whip line and a margin line.

Bait was all natural maggots and casters. No groundbait or pellets today.

All-In
The far bank island was way too tempting so I started on the waggler to try and winkle any of the lakes resident chub by pinging casters across. So the first 30 minutes was spent on the waggler with some small silvers coming, however nothing of note and of course the stocky carp got involved in the action too. Meanwhile I had been feeding the whip line and knew that I could catch fish at a quicker rate than the waggler.

Dropping on to the whip line and I was quickly into fish of all sizes from the silver blips to some lovely 6-8oz roach. I had also started to drip feed the margin with some casters.

Ray to my right was catching well on his long pole line, something which I had decided not to set-up. Maybe I should have set up a line there with a feed and leave method?

As the whip line died off I switched to the margin line and proceeded to still take small roach until I hooked one the lakes large carp... netting the monster after about 6 minutes it was time to switch back to the waggler to let the whip and margin lines settle again.

I did have a couple of casts on the bomb rod across to try and tempt a barbel but I only ended up coming back with small carp so that plan was abandoned. 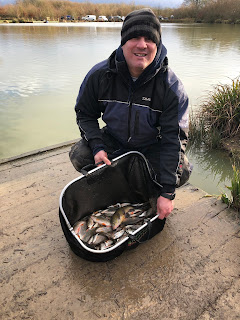 Pikey on my left was fishing the margins and I did see him sneak a lovely chub out and then of course the next put in hooking a carp with his elastic streaming across the lake...

The rest of the match was fished between the waggler, whip and margin line until the all-out.

Result
It was a chip shop result, getting battered both sides by Ray and Pikey. I weighed 11lb 8oz for 4th in section

Conclusion
Set up a 6 metre pole line to take the fish that get chased from the whip line and also to land those better fish as I did hook a couple of better fish on the whip only to end up broken by them... At the moment I cannot seem to get past a silvers weight of 11lb!

Roll on Stafford Moor, next weekend will be mostly preparation for the week away. Cannot wait! Tight lines everyone! 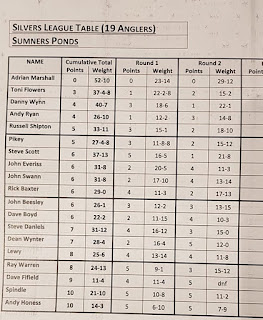