Set-up
The pole line at 13-14 metres to target the tree line.  I was surprised at the difference in depth between peg 1 as I grabbed a rig that I had used on Peg 3 a couple of weeks ago.  It was a good 12 inches shallower.

Feeder rods I set-up a 12ft and 13ft rod both with 55g hybrid method feeders to target the far bank which was a good chuck of 70 metres.

All-In
Hathers politely called all in however we never heard what he said as he was peg in the 30's on the other bank today.  Four balls of groundbait rich with micro pellet, dead reds and sweetcorn went on the pole line and the feeder assault began.

I started with 3 minute casts, white 6mm wafter surrounded by micro pellets.  It took around 30 minutes / 10 casts before the first pull and a lovely tench, around 3lb in the net.

After the first couple of hours I had 8 fish on the clicker with a couple of nice bream in that haul too.  The angler on Peg 2 had around the same number of fish from his 25 metre feeder line however the stamp of his fish were smaller.

The wind got up so I switched to the 13 foot rod to get out to the far bank.  I was now on 5 minute casts as I felt I had got some piles of micro pellets already out there however the line seemed to slow right down even after change bait using different colours of wafters and 8mm pellets.  Thirty minutes of inactivity saw a switch to the pole line.

The first drop in on the pole with sweetcorn and bites straight away the float sailing away.  The first skimmer came to the net, smaller than the feeder line however at least I was still getting bites.  Another bonus tench on the pole line and then the fish seemed to back off, even after going out to 14 metres nothing so back to the feeder line.

First chuck of the feeder produced straight away which was a positive sign.  The next few casts nothing, so I decided to reclip adding a few more metres to the cast.

I fished the long feeder until the last hour of the match with fish coming quite constantly to the net.  Bites were either straight away or on the 3-5 minute mark. 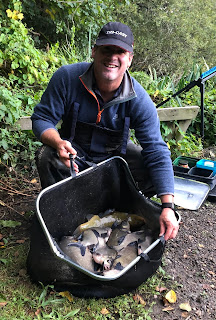 The last hour I tried the pole line again to see if any large bream had settled over it which they had and I connected with five more large fish however two lost before even getting them to the net.

The all-out was called, the rain started again, typical and I had 37 fish on the clicker across three nets, was that enough?

Conclusion
I had the long feeder line to myself for the entire match with Pegs 2 and 3 simply not electing to fish it and this was the main line of attack that put around 30 fish in the net.

The pole line produced some good fish too and I'll be back to have pleasure fish just on the pole to see what it could produce.

The only, "what if" in my head was the 25 metre feeder line as there was a definite sign of fish when we were tackling up however as Peg 2 showed me, those fish were smaller overall so that nagging doubt has been cast aside.

A great match, thanks for the series Hathers as I've guested for two of the anglers in it.

Overall Jeff Driscoll fished a good series with 2 section wins to claim the OBH LOVERS Title. A great series organised boy Mark Hathway with an average weight of 38lbs per angler across all 4 rounds of mainly skimmers at a beautiful venue, you can’t beat it.

Big Si was in 7th place for the series going into this match however with the match win and me guesting for him he was awarded +1 which moved him up to 3rd place and in the money! 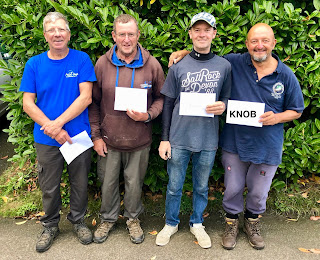