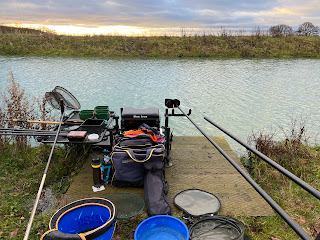 After a two year break, 18 months spent in New Zealand dodging Covid lockdowns, the creation of another human being, I finally got back on the bank today at Redwood Park near York.
A chance to catch up with Patrick, a work colleague who is also a match angler.  Patrick has a winter silvers series coming up at Redwood Park so it proved an ideal opportunity for me to blow away the cobwebs and help sus out what methods would work on a lake Patrick had not fished before, The Lagoon.
The weather was a very mild, 13 degrees C with a light wind blowing down the lake.

The Draw
Not actually a competition today but we decided to fish pegs 5 and 6.  I won the 50p toss and chose to fish peg 6 with Patrick on 5.  Plenty of space between the pegs.

Set-up
The Waggler rod was straight out of the bag to target past the pole line at multiple depths and across together with a number of pole lines as follows:
Depth on the pole lines where around 6 foot and pretty even across the peg so this pattern could be use in a number of different lines.  I also set up a lighter 0.4g rig if the fish didn't want the bagging rig and elastic was Matrix Slik 4-6.
Bait for me was more natural, F1 Sweet dark groundbait, maggots (red and white), casters with some 4mm expanders just in case.

All-In
We kicked off the session at 9:30am and had two different approaches to try and learn as much about the venue as possible. 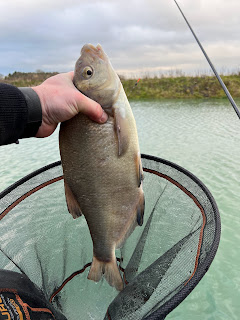 Patrick went down the crushed expander and micro pellets route and I went a natural with ground bait approach.  I choose a line at 13 metres to my left that I put 4 balls of groundbait in with some dead maggots and casters.  This was my "cooker" line.
The top two plus two I put a single ball of neat groundbait in on the left side, the right side where I started I dropped nuggets of groundbait in with each put in, starting with live maggot.
It took about 15 minutes before Patrick and I got into the fish, small skimmers on the pellet line and roach together with the worlds smallest F1 for me on the groundbait and maggot.  The pellet line was producing quicker than the maggot line for Patrick however his fish backed off earlier.  I'd move to the short line with a single ball of groundbait and it was producing fish more regularly.
After a couple of hours I went over the "cooker line".  Bites straight away and a bumped larger fish too. Next fish out was a small mirror, not what we were targeting.  Back over the same line and next fish was a large bream, just what we were looking for, however there wasn't anymore bonus fish to be had. 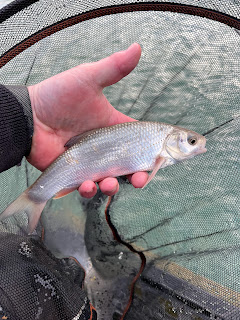 The fish were certainly coming to the feed and after speaking to the bailiff the silvers in the venue were stocked a few years ago, there was loads of fish about and as such plenty of competition for the feed.
As this was a practise I topped up the cooker line with another 4 balls of groundbait, then topped up the left line with a ball of groundbait and fished straight over it.  The fish where on it straight away.
There were a lot of fish topping on the far bank which was a great target for the waggler.  The results were instant!  Chublets and Ide hooking themselves as the float was hitting the water.  The float didn't settle to many times before it was fish on!  This line was producing fish quicker than the close pole lines.
Finally the top two line that had been drip fed with casters and maggots.  Using a strung out rig the float soon went and some quality Ide came to the net.
With it still light, I decided to pack up early before the ominous looking clouds in the distance started a pour down. 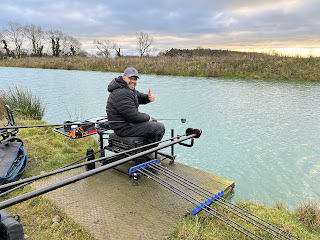 Conclusion
The fish came to both the pellet and groundbait approach however the groundbait, maggots and casters proved more productive in the long run, together with appropriate swim rotation.
So, the match plan will be to set up the waggler to target the far bank early.  Prime long lines with 4-6 balls of groundbait as a cooker line.  If the waggler line dies off, start a line on the near shelf with a ball of groundbait and keep drip feeding the casters and maggots on the top two line.
We both thought that 20lb of silvers would be a good weight for The Lagoon.  Let's see what the results bring on Sunday! 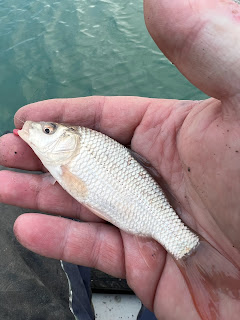 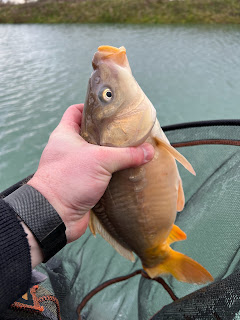