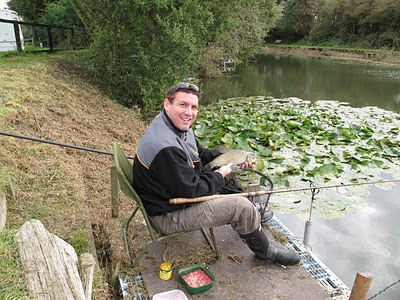 After the success of Manor Farm Fisheries, Mr Keightly and I headed to a local lake where Mark has had some good Carp success, Crystal Lakes in Fenstanton.

They have three lakes to pick from, the Prize Lake, Lake "A" and Lake "B".

We arrived early in the morning on Saturday 16th October, around 7am and had a walk around Lake's "A" and "B".  Mark knew exactly which swim I would want to fish...  maybe he should have picked his lottery numbers that day as he got it spot on...

A lovely lilly lined swim face me with plenty of options, either far out or either side of the lillies.

I started feeding two main lines, the edge of the lillies in front of me, about one and a half rod lengths out and another swim straight ahead about three rod lengths out...

After balling in about 3 golf balls of the trusted secret ground bait mix to the edge of the lillies, I plumbed the depth, about 4 to 5 feet and set about with the simple insert waggler from the previous day, 4lb maxima main line and a size 16 barbless to 3lb bottom.

After about 5 minutes, the first silver fish had been landed, a nice roach of a couple of ounces... continued with the little and often feeding tactic using hemp and after about 40 minutes hit into a large fish that took me straight into the lillies... SNAP, hooklength gone... ;-(

Set up again, feed the close swim a little more, and fished the longer swim, constantly getting small roach and skimmers.  This pattern continued for the rest of the day, the only really decent fish was a nice size skimmer pictured below.

Mark's day saw no carp which was a shame, infact as we took a break and walked the lakes nobody had caught anything of note.  The temperature had dropped somewhat so we blamed the weather...

Another fun day was had by all, including me getting some errant hemp catapulted at me for a cheeky comment about Mark's carp fishing prowess... you would never believe we are both in our late 30's early 40's ;-)

Packed up early, headed to a local tackle store, Sheltons of Peterborough for some retail relief and prepared for our boys night out in Peterborough... that story is for an entirely different blog!!! ;-)