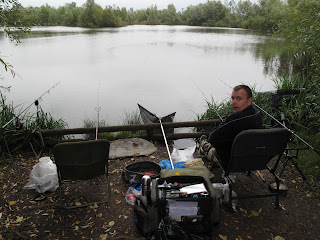 I took Friday 15th October 2010 off work and headed down to Manor Farm Fisheries, to fish the Becks Lake with very good friend Mark Keightley, aka "matey".  I did borrow quite a bit of terminal tackle from Mark including something to sit on...  Thanks matey!

We decided to fish a double swim, which was a lot more sociable than being in separate swims, plus we could help each other out in case of big fish... or birdlife... more about this later.


We tackled up and started fishing about 8am.  Mr Keightley had brought us some red maggots, all sorts of bollies, hemp, sweetcorn, good old spam and his home made ground bait made from trout pellets and crumb plus other offerings.

I decided to start with a simple insert waggler set-up and Mark set up the first of his Carp rods.

Plumbing the depth, I started with a couple of small golf balls of groundbait in a line about 3 rod lengths out.  Hookbait I went for a simple single red maggot, feeding hemp on a "little but often basis".

After about 10 minutes, the float slide away and I struck into a very decent fish, 15 minutes later Mark slide the net under a beautiful Common Carp, estimated at 5-6lb, needless to say I was very pleased after such a long break.

Mark had decided to set up a method feeder and flung it out to his right side, next to a nice clump of reeds.  The birdlife soon came over to investigate...

I put out a couple more catapults of hemp after my first battle and some red maggots as offerings, rebaited and recast... another 10 minutes passed and we slipped the net under a small common carp... what a great start! 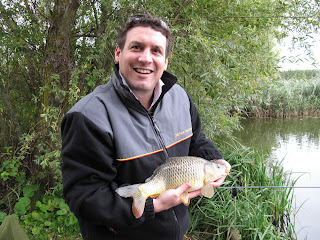 Mark had no luck on the method feeder, especially after loosing it in the reeds so opted to set up a float rod too.

We shared the swim and had a pretty constant stream of roach, skimmers and perch.

I'd had no luck on the carp rod that I'd set up which wasn't to change during the course of the day.  Mark however got the first of his run...

He struck into a decent fish that led him across to the centre of the swim where it snagged and his terminal tackle was returned to him including a lovely "twig" fish...

We had noticed some decent fish crashing off to our right, so this was Mark's next target area.

In the meantime both of us had managed to snag some local wildlife, myself a duck which pulled free breaking the hook trace and Mark a Morehen.  We landed the Morehen and removed everything without damage.

Mark's carp rod alarm went off and he was into a large fish which took him straight right into the reeds.  There was no chance of steering the fish and this resulted in a lost fish for Mark...

The weather got colder and we decided to pack up and head home, ready for the next session on the saturday.

Interestingly, we tried sweetcorn and meat to no avail, the red maggot was king on this day.  A day that saw my return to fishing with a big smile on my face ;-) 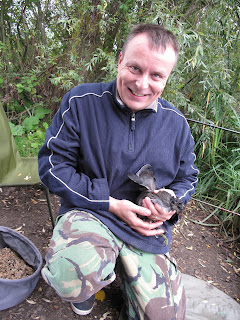