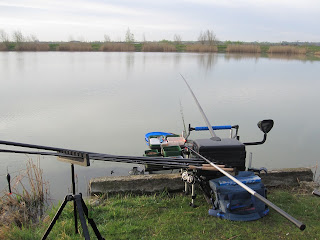 Heading back to Rookery Waters we decided to fish Rook Water after Mark had previous success with some early season Tench.

The weather was pretty cold and a chilled wind soon started to blow across our pegs.  I hooked a nice ghost carp of about 2lb from the off, followed by a roach.

Mark was having trouble keeping his waggler in the swim and took an early decision to move to the opposite corner of the lake, peg 16. 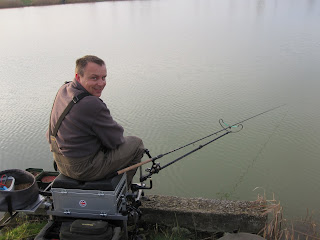 I decided to try and fish out my chosen swim and soon switched to the feeder.  The fish turned on and I landed three carp in quick sucession.  The action died, and now Mark was consistently getting fish on the feeder.  His choice to move was a good one!

I was landing one fish to every couple that Mark was getting.  Our banter/abuse continued via mobile phone.

I decided to drop in my margin rig with a piece of corn.  The float bobbed and I landed a nice roach of around 10oz.  Next drop in, the float sailed away and something more substantial was on the line, the black elastic did it's job and a subdued, but lovely tench came to the net.

Now Tench (tinca tinca) are my favourite fish, it was the first coarse fish I captured when 13 years old so hold a special place with my fishing.  Fish was fin and scale perfect.

We weighed our catches, Mark had 22lb, and I ended up with 16lb, so another point to matey, putting me 2 points down... not good, must try harder... roll on Tunnel Barn in April! 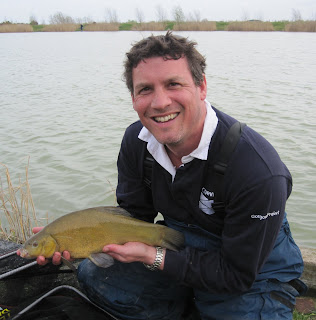