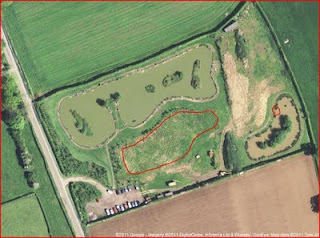 Heading home for the weekend I decided to fish a local lake that I heard a lot about on the Anglerscabin forum called Renny Lakes.

This particular weekend I was taking my nephew fishing for the first time so decided that a practise session was in order to ensure that he would catch the following day.


Renny Lakes has three lakes, although the google imagry has yet to catch up.  I've highlighted the new lake in the image.  I decided to fish the rear lake which looked more established than the other two and chatting to the anglers it held the larger fish and selected a peg on the left side towards the rear of the lake.

The swim had margins to the left and an easy reach with the pole to the far bank and a nice clump of reeds. 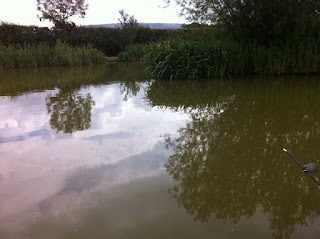 The Session
Plumbing up I found the lake had a very even depth of around 3', so set up a far bank rig with white hydroelastic and a margin rig.

I kicked off with a small pot full of pellets, corn and maggots on the far bank and was feeding the margin swim by hand with pellets and corn every 15 minutes or so.

The first bite came very quickly from the far bank swim and a lovely stock carp came to the net.  It certainly fought harder than it's small statue.  The swim produced more stock carp for the next couple of hours until the next bite saw the white hydroelastic streaming across the lake and towards the reeds which resulted in a lovely mirror coming to the net. 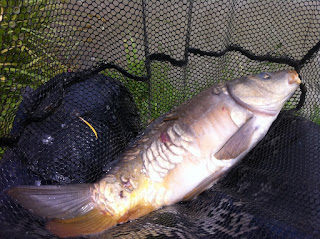 My phone rang and it was my fishing mate Mark.  While on the phone to him I'd baited a worm on the hook and dropped it in the margin swim so I could talk and fish at the same time.  The margin swim only needed the top two kit of the pole so for a change I could multitask.

The float dipped ever so slightly and I lifted into the bite, again yards of elastic started to shoot out from the pole, I had to end the call to Mark as this fish was off like a rocket.  I put a couple of sections on the pole and played the fish in open water.  I slipped the net under a lovely estimated 5 - 6lb mirror carp. 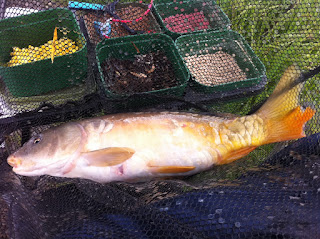 I refeed the margin swim and went back to the far swim which resulted in a nice roach of around 10oz.  The margin swim was starting to tempt me again and it didn't fail producing a lovely common carp around 4lb.

The rest of the day continued in the same way.  Taking one fish from the far swim and then another from the margin swim.

I packed up around 3pm as I had to get home for one of the lads birthday's, a night out in Yarm and at the end of the session I'd had around 30 carp from 6oz to 6lb.  A great days fishing and a very pleasant day.

I was very hopeful for the next day when my nephew was coming down for a few hours.
Renny Lakes
Location: Renny Lakes, East Harlsey, Northallerton, North Yorkshire DL6 2EA, UK