June 06, 2011
So I'm back in London, it's the bank holiday and to top a great weekend of fishing, what better way to see the extra day off than go fishing...  As Billet Lane was closed due to the very low water level I decided to head to Wood Lane Fishery in Iver.  Only 20 minutes drive from my flat, so nice and easy.

There are two lakes at Wood Lane Fishery.  The first is a simple bowl, quite featureless.  I decided to fish the second pool and found a swim where I could easily reach the island with the pole. 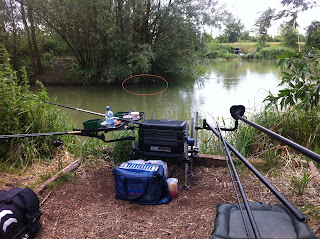 I started a swim close to the island, one to the right of the island and other on my top 2 sections.

I potted a large cup of corn, hemp and pellets near the island.  No sooner had that pot gone in I saw tails swirling and the water turn cloudy.  I quickly shipped out a shallow rig with a big worm on it.  1 minute later the elastic was streaming out and the first fish of the day was on.

I landed a mirror carp with a funny hump on it's back.

Quickly shipping out again, another minute passed and I landed a second carp.  The island swim went dead, so I potted in some more corn, hemp and pellets ready to ambush some more cruising fish.

My close in line produced some lovely roach and small skimmers, then about two hours later I noticed the island swim was alive with fish.  If you check out the photograph you can see the backs of a number of carp.

I started to flick out a few pellets and more carp appeared.  I waited for about 10 minutes after feeding some more to get the fishes confidence up then shipped out the shallow rig with a worm.  Next fish landed was a lovely tench and another 5 carp came to the net.

The island swim was quite a tough one as it was very weedy and there was a lot of lost tackle and line hanging from the tree's which I got tangled with a couple of times.

A great days fishing, the weather held until around 3pm, when I started to pack up.  Reaching the car, the heavens opened, perfect timing.

Really enjoyed Wood Lane Fishery.  The ladies in the wooden shed that was being turned into a tackle shop were very friendly.  Great fishing, but a little bit pricey at £10 a day.

Below are some of the days catch. 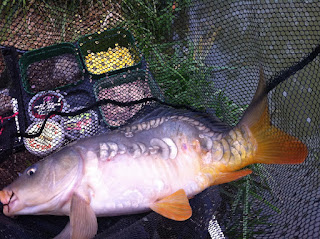 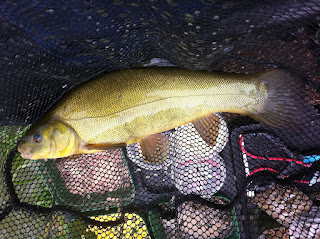 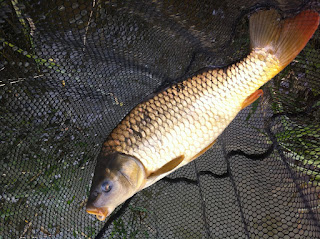 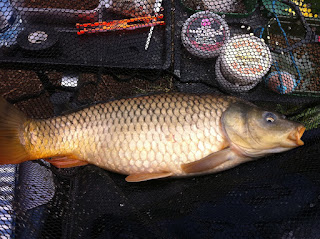