July 25, 2011
My other nephew, Jacob expressed an interest in fishing after some friendly "uncle" persuasion.  So no better venue than Renny Lakes.

I decided to fish the same swim as I'd fished with Owen in his first fishing adventure as blogged about last month.

I arrived at Renny Lakes around 6:45am and secured the peg.  Only one other angler had arrived, but he was fishing the front lake.

I selected the margin swim to the left as the main attack.  I knew that I could go further up the left margin if this swim wasn't producing.

For Jacob, it would be top 2 of the pole directly in front of him.

The Session
Potting the swim with 4mm & 6mm pellets, Casters and Maggots using the large pole pot and also pinging out 6mm pellets soon brought the first fish to the net.  A lovely little tench of around 6oz.  This pattern was to follow until the carp turned up.

The first carp was a typical Renny lakes carp of around 1.5lb.  I added some more pictures of the carp at the end of the blog.  When the fish started to get smaller, I would go back out and put a pot in, this soon brought the carp back.  Bait of the day was Halibut Jellets.  I did try a worm but only got roach, so back to the jellets.

Jacob arrived around 10:30am with his Dad, also called Mark... gets very confusing in our family ;-)

So, I showed him how to plumb the depth and that we would need to feed regularly to get the fish into the swim.  Jacob's first put in and a lovely roach came to the net, unfortunately the picture had Jacob's eye's closed.  The roach was quickly followed by more roach and rudd.  We tried a caster to get a better quality fish, but the maggots where working quite well.

Switch to a worm to try and tempt a carp, but unfortunately the roach and rudd were just too quick!

Jacob's four hour session was quickly over and his dad came to pick him up, leaving behind some very welcome Cabury's Caramels.

Resuming my session, the carp where dominant through out the day.  As the day drew on I potted in about a pint of maggots to the right hand margin and left it for 30 minutes.  I then used a worm and dropped the rig into the margin swim... no sooner had the float settled than it was off.   The grey Hydrolastic was being stretched very quickly towards bottoming point.  I got off my box, grabbed the landing net and walked to the next swim.  Expecting a monster, a lovely 4lb mirror carp came to the net.

Next put in on the margin swim produced a 2lb common carp.  Time was marching on and had to get up to Tynemouth to see the good lady.  I packed up after netting around 30 carp, plenty of small tench and a handful of roach and rudd. 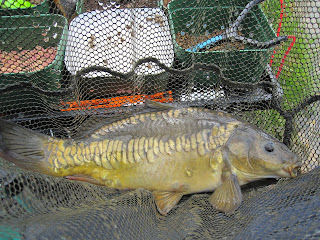 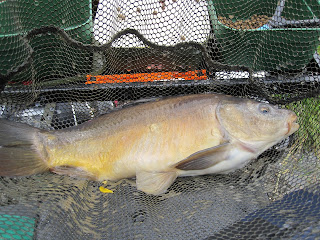