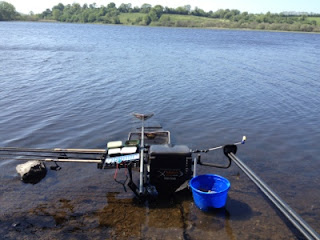 The Setup
I opted to set up the following to tackle my swim:

We had decided to fish in randomly drawn teams of two and I was paired with Glynn today.  The winning team would get 1 point, second team 2 points, third team 3 points.  The angler over the week with the least points would take the "festival" title.

The All-In
I balled in 4 large balls of groundbait packed with red maggot and sweetcorn and would let this swim rest for at least 90 minutes.  While waiting I went out on the feeder baited with double red maggot.

The feeder was recast every 10 minutes for the first hour to get some bait on the deck and I would then leave it for 20 minutes or until a bite.

Bites were not coming very quickly at all, in fact all the lads were struggling.

After a biteless 90 minutes I tried the pole line which saw some limited success with a couple of small roach/bream hybrids coming to the net.

It was proving a very tough day and while the weather was great for getting a sun tan, the bright sun and cloudless sky wasn't helping the fishing.

We all packed up around 4pm and went to weight our meagre catches in...

The Result
I weight 1lb 9oz which was top weight of the day, Paul weight 1lb 7oz and the others had around one pound, with the exception of Glynn and Bernard who both blanked...

Conclusion
Being a natural venue, watercraft plays a lot bigger part.  If the fish are not there and not willing to feed then there is not a lot that you can do apart from trying to find them.  We would be returning the next day on the same swims, so hopefully the catches would be better tomorrow.