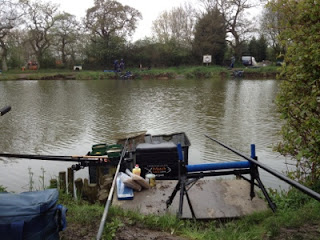 I've heard a lot about Rolf's Fishery particularly the big match weights, large fish and the need to use powerful elastics and heavy line to get the fish out.

Having never used my red hydro elastics I didn't know what to expect to be honest.

The Draw
Scone gathered all the usual suspects and John, fishery owner provided him with a mega phone which of course was used to great effect by Ian.

I drew peg 14 which was on the opposite bank to the car park.  Having packed my gear that morning, I was horrified to find my barrow had a flat tyre which made getting my gear from my 4th floor flat to the car a right royal pain!  Luckily John had a pump and I was soon getting the gear to the peg.

The Set-up
John had told me to set up a long pole line and also two margin swims under the bushes on my left and right side.


Bait for the day, Corn and Fishery Pellets (4mm, 6mm and micros).

Depth wise, Rolf's is deep, around 6 foot on the long pole line and the

The All-In
Cupping in some dampened micro's with a 4mm and 6mm pellets on the 13 metre pole line and on the advice of John, straight over the top of it with my banded 6mm pellet.  The first bite took around 10 minutes, working the pellet every minute or so and the first small skimmer was soon in the net, although I'm surprised I never bumped it off with the red hydroelastic.
Feeling around for bites, I topped up the swim after an hour.  I also started the feed the margin swims, one with sweetcorn and the other with pellets.

Bites where coming, but I found that I was bumping hooking fish, down to fishing a banded pellet?  I replumbed the swim to make sure I was dead depth.

I started to put together a run of large skimmers, around the 2-3lb mark, they certainly can scrap!

After around 4 hours, the large carp had not shown up and the skimmers had stopped coming. 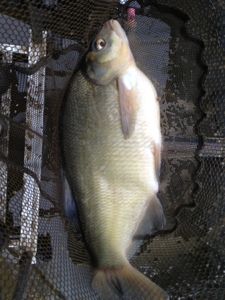 The margin swims had produced nothing at all and the right margin swim was abandoned as it was quite snaggy.  The 3 keep nets I'd put in would soon become a bit of ridicule amongst the lads, particular my good mate Paul aka Animal!

Animal and Scone had had enough and were packing up and getting ready for the drive to Salisbury.

Finally a carp took the 6mm banded pellet and the fight was on, the red hydro was getting a good work out and after 15 minutes I got a glimpse of a Rolf's lake mirror carp.  Netting it, the all out was called.

Packing up, the barrow's tyre was flat so, it was back to trudging the gear back to the car.

The Result
My weight was 16lb 8oz and I thought that would get me know where in the section so I was very surprised when Sconey shouted, "Lewy you can buy yourself a new tyre, you're second in section!"

Brilliant, £35 pick up and as Animal had tipped back I took a pound off him too, which is the sweetest victory amongst mates when fishing!

Conclusion
Rolf's wasn't fishing well that day, despite one of the lads getting a 95lb finishing weight.  The carp only showed in one area of the lake.  Sconey didn't even get a bite all day, ColBrad who was next to me ended up with 7lb of Perch. 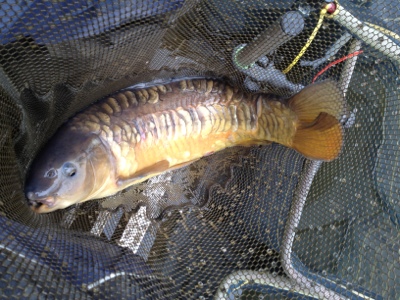