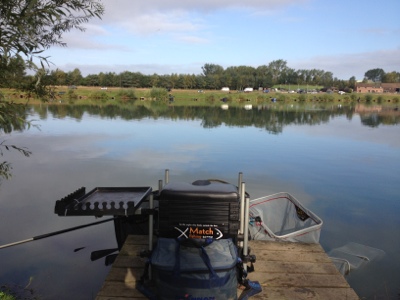 Day 2 of the 2012 Larford Lash-up... how many competitors would make the bankside after the massive night at Chateau Disney???  Well surprisingly all of them, although there were a few notable incidents in the middle of the night and one particular MFS'er , who shall remain nameless who didn't get back to the hotel until 7:30am...

Colin (BNF) had claimed to victims of the famous "Battered by BNF" t-shirts, Jads and Rich Bedder... some how, Jads t-shirt ended up left at the hotel... check out the pictures at the bottom of this blog ;-)

The Draw
Again, Andy and Sarah Kinder had this well organised.  Those anglers who had fished the Match or Arena lake where to draw from the Specimen lake bucket and vice versa.  Two semi-orderly lines formed and I drew out Peg 56 on Specimen lake, two thirds the way along the Chalet Bank.

Neighbour for the day was Anthony, who I was pegged next to the previous year along with Bob Poole... I wonder if I could reclaim this £1? 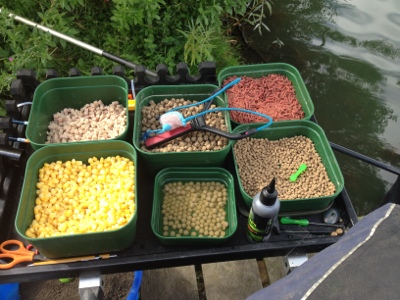 Having fished the chalet bank of the Specimen lake last year, I had a fair idea of my approach.  So I looked for the shallow edge of near shelf for my margin line, opposite peg 55 between myself and Anthony.  At 14.5 metres I found the bottom of the shallow sloping shelf and would target this line for the skimmers and hopefully carp.  I set-up a method rod and pellet waggler, both would be at around 20 metres.

The depth at 14.5 metres was top 3 and the rigs I had in my box didn't go to that depth, luckily we had plenty of time to prepare so I set up a fresh rig with plenty of time to spare... but was a little annoyed at myself for the lack of preparation.

The All-In
I cupped in 6 balls of groundbait filled with dead reds and corn on the 14.5 metre line.  I cupped them in a metre short of my actual fish area giving me the option to fish over it, to the side or beyond it at 14.5 metres.  This line would be rested for an hour to allow the fish to settle.

I threw a handful of corn on the margin line and would continue to do so for the length of the match until I was ready to try the margin line in the last couple of hours.

So I went on the method for the first hour, all the time pinging four to five 8mm pellets over the feeder.  I was recasting the method every 5 minutes to get some bait down, after 20 minutes the tip went round and the first fish was on.  A lovely golden colour 5lb mirror carp was in the net.  The method produced no more bites so after the hour I went onto the pole line at 14.5 metres.

Baiting 4 dead reds on the hook, the float soon buried and the first skimmer was on.  After a couple of hours I had a good netful of skimmers and the bites were dropping off, so I quickly topped the line off with two balls of groundbait and had a look in the margin for 10 minutes to see if there were any fish about and secondly to let the pole line settle after the top up.

Nothing in the margin, so back onto the pole line I decided to change bait to a kernel of sweetcorn.  This change resulted in a better stamp of skimmer and also a surprise eel.  I fished this line until the last hour of the match as the bites tailed off again I did one final top up and dropped the method into the margin swim and waited.  After 20 minutes I got a big line bite, so I decided to concentrate on the margin line until the end of the match... unfortunately it produced nothing further!

The Result
27lb 5oz, mainly of silvers with the one 5lb carp to show for my efforts. 4th in the section with Andy May having 100lb of carp and skimmers... but I beat Anthony and neutralised the £1 from last year.

Conclusion
I was catching steadily on the 14.5 metre line and had a couple of looks on the margin line.  My final 30 minutes was spent on the method in the margins with one large line bit.

I also came out as "top Jock" and bagged £8 and of course bragging rights over the other lads... still haven't seen the £8 mind you as I had to get home on Saturday night.  I'm sure I'll get a couple of beers next year from the boys ;-)

A great weekend with great friends and meeting new ones.  Big thanks to Andy and Sarah Kinder, Phil Briscoe and the team at MatchFishing Scene... roll-out the 2013 Larford Lash-Up!!!!

Some pictures from the Friday night...