March 18, 2013
Mark is now 2-0 up in the Mark vs Mark 2013 competition, today's venue, How End Fishery is more to my style of fishing so I've got a good chance of getting a point back on Mark.  The journey to the fishery was a bit of a nightmare with thick fog, Monday morning traffic and a couple of accidents.  It had rained quite hard overnight and the temperature reading in the car indicated -1C.  We decided to fish Dani's lake and after speaking to Phil Stone (Pebs) owner of How End Fishery he advise that we should be on pegs 3 or 19 fishing the waggler with corn searching the far bank for the fish and to set up an 11 metre line with pinkie for the skimmers and tench.

The All-In
We were quite late getting to the fishery due to the traffic and were ready around 11am.  We would fish until 4pm for a five hour match.  How End allows the use of their own keepnets which is quite a rarity these days and would allow us to weigh our catches at the end of the day.

Starting on the 11 metre line I put in a small nugget of groundbait and lower the pinkie after it.  It took around 20 minutes before the float dipped and a very small perch was in the net.  Repeating the process the next hour past very slowly with no bites.  Mark was also struggling and had hooked one fish but unfortunately bumped it off.  I decided to try another line but I would dribble in some pinkies instead of grounbait.  This resulted in a skimmer but the action was slow. 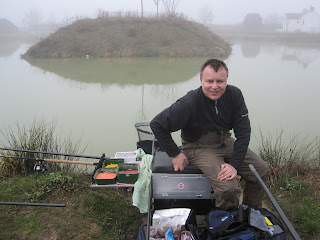 Both Mark and I decided to give the waggler a go, so following Phil's advice the bait was a single corn kernel.  My float dipped and a lovely small tench was the result.

The day past by slowly and the action even slower.  Tarnya (Phil's wife) turned up with Phil on the phone.  He told me to try and find the sunken islands on the pole line and to fish the edge of these islands.  The waggler needed to be past past the corner of the island to my left, bringing it back a metre at a time to try and find where the carp were balled up.

Trying the waggler for the next 30 minutes, no bites at all.  Where the carp somewhere else?  I think they were... maybe without the pressure of a match the fish don't tend to move around from the swims? We didn't find them.

Back on the pole later in the day and the fish started to come a little quicker than earlier, but still no in huge numbers.  I caught a couple of nice hybrids and a nice roach.  4 o'clock came round and we called all out, just as Phil was walking round the lake with the mad stone chasing dog...

The Result
I took the win, but it was a shame both of us didn't catch much all day.  The score is now 2-1.

Conclusion
A disappointing day at a fishery that can and does produce lot better results, just check out the winter league blog by Phil.  Maybe the heavy rain and cold weather put a dampner on the day?  I'll be back for the two dayer with the MFS crew.  Always a very friendly place with Tarnya and Phil ever helpful.  Cheers guys!