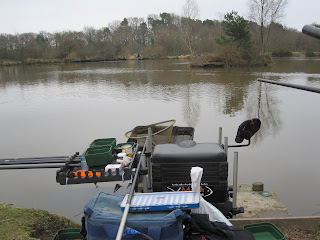 Day 1 of the eagerly anticipated Match Fishing Scene Silvers Festival at Stafford Moor.  After a 5 hour drive from the North East, I arrived at Stafford Moor in time for a cracking Sunday lunch cooked by Colin (BNF).  This year I was in the “Lodge of Plenty” with Paul (Animal) and Dave (Shedful).  The normal banter soon started and the beers were flowing.  That day the lads had fished a Champion Leagues match and a couple of anglers had ended up going for a swim as pole sections had gone in the water.  John (RedArmy) and Pete (Merce) both looked frozen!

In the year since visiting Stafford Moor, Andy Seery had done a lot of work pruning back trees and the fishery looked really good.

It was a great night catching up with the Matchfishing Scene lads and meeting some new ones.

The next morning, Colin (BNF) cooked up a cracking full english breakfast and we had plenty of time to get to the draw at 9am.  The normal shambolic queue for the draw in Andy’s office / tackle shop soon formed and the banter was brilliant as usual.

I dipped my hand in the bag and drew out Peg 6 on Tanners, the lawn section so an easy walk from the Lodge of Plenty.

The Set-up
The wind was off my back on Peg 6 and it was quite cold, so a pole only day.  My neighbours were Dave Brittain, a fellow Teessider on Peg 5 and Mark Murdoch on Peg 13.

The All-In
Plenty of time to set-up as the match was 11pm until 4pm.  I fed the 10 metre lines, one with a ball of groundbait including some casters and dead maggots on the left line and a small cup of chopped worm on the right hand line.  As the day progress, these lines were topped up every hour in accordance with the bites tailing off.

I started on the left line and it took around 10 minutes for the first fish to come, a small roach.  The bites continued throughout the hour before the swim needed topping up.  I fished this line for the first two hours of the match before the bites dried up.  Switching to the chopped worm line bites were coming steadily, but the stamp of fish didn’t improve.

Dave Brittain had gone to 14 metres and he had started his swim off with 3 balls of groundbait.  His fish were of a similar stamp to mine.

Every 5 minutes I was flicking 5-6 casters on the keepnet line.  3 hours passed and it had been a steady stream of small fish.  Dave Brittain was getting a better stamp of fish including a large 2lb perch, so I kicked off my 14 metre line with 3 balls of groundbait.

I went over the long line after 30 minutes but got the same result as the closer lines, small fish!

Trying the keepnet line I hooked a few Perch and that was it.  The last 30 minutes of the match as the light was dropping I picked up two decent skimmers and a couple of good roach, all while Dave was playing what would turn out to be a 10lb mirror carp, landing it on the all-out.

The Result
6lb 5oz, beaten by Dave Brittain with 10lb and Mark Murdoch (MarkM) with 16lb.  Mark also had two great Perch, each just over 2lb each.

Conclusion
The weights in my section weren’t huge and it had been a tough day, but I had bites all day it was a shame the bigger skimmers never moved in.

The T-Shirt
Col had two Lodge of Plenty dwellers for neighbours, Dave and Paul and he battered them both, so two shirts were given out.  Dave’s first shirt and Paul’s third!

The Lodge of Plenty Dinner Menu
A cracking Lamb Curry with Bombay Potatoes and Naan Bread, it was blooming lovely!  The craic in the Lodge that night was out of this world, with Andy (Tonkin Tommy) and John (RedArmy) as lodge guests.

Andy G, Dave Brittain, Stevie May and Mark Murdoch came round for drinks and the unfortunate victim of the night was Dave Brittain... all I’ll say is it was “foxing” funny! 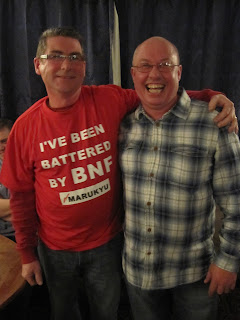 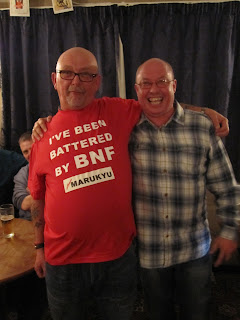 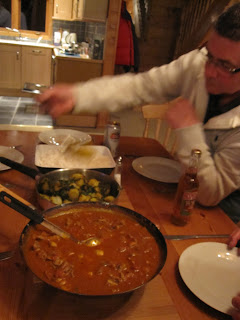