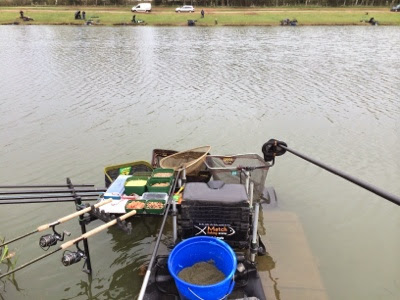 The opening competition for the Maver Match This series at Larford Lakes. I've had some good sessions at Larford with the Match Fishing Scene crew over the past 3 years at our annual Larford Lash-Up event so while not thinking I'm going to win this match, at least I should be able to post a decent result.

It was an early start from London to get to the venue before the 9am draw, but with an early start comes no traffic so I made the journey in under 2 hours. It was great to see a few familiar faces like Andy Kinder, Sarah, Churchy, Baz Wrexham and Rob Bagger Austin!

The Draw
101 competitors had their names down and the draw was in order of ticket sales which went very smoothly rather than the standard push and shove of the queue.  I was lucky to draw 6th and picked out peg 48 on Match lake, burr bank.

I'd been in this area before on last years Larford Lash-Up, peg 58 to be exact.

The Set-Up
The water level had been dropped in order for the event to take place.  There was a clear line where the water had been, some 6-7 foot higher.  In fact my platform was still submerged.  I had a clear match plan which involved:

With the higher water levels I had to make up two new rigs for the 12 and 5 metre lines, but with plenty of time to set-up meant there was no rush.  The rigs needed were deeper than the top two!

Bait for the day, 8mm & 6mm hard pellets, dampened micro's for the method, sweetcorn, dead maggots and some worms as a change of bait for the margin lines.

The All-In
The plan was to feed my 12 metre line potting in some 6mm pellets and corn, feed the 5 metre line by hand and start the match on the bomb and pellet, pinging a few 8mm pellets over the top every 5 minutes.  The wind had started to blow across the lake and the 12 metre line was looking in danger from bad presentation or was that just an over tired me not being able to hold 12 metres in the wind??

The first hour past very quickly and the first bite while savage resulted in no fish on?  So I changed the hooklength out and soon got back in touch with the fish, only getting 3 small F1's in that hour but it was a start.

I could see that the 12 metre line was fizzing with activity so I could not resist a look on that line.  I had decided to opt for banded 6mm hard pellet rather than a soft hooker.  Lifting and dropping the float, it soon buried with another carp in the net.  The next fish was foul hooked which told me they were potentially shallow so I took some some depth of the rig to see if that made a difference, nope, so I put my shallow rig on and started to ping some 6mm pellets over the top, nothing, plus the wind had increased making the 12 metre line harder to present the bait.

So back on the bomb and pellet which resulted in some more fish.  I noticed that Matt, aka Maver Matt, was doing quite well on the method feeder over from me so I decided to switch to a method with banded pellet and micros.  Matt was fishing just short lakes middle, so I did the same.  This started to produce fish that bit quicker, although quicker wasn't really quick enough to be honest.  The stamp of fish weren't what I would normally expect from Larford.

The last hour was approaching so I started to prime the margin's between my method casts.  The margin feed was loose groundbait with some corn offerings.  Unfortunately the margins didn't produce anything, something that was repeated across most of the lake to be fair.

The 5 metre line also wasn't working for me, so I stuck the rest of the match out on the method.  At the all-out I knew that I didn't have enough fish, but could not bare to tip back as I wanted to know the result for my blog.

The Result
Well, I knew I wasn't going to win but I needed to weigh in for the blog's sake.  Phil Briscoe did the honors for me and I'd caught 24lb 14oz of carp.  Nowhere near my 76lb from the Larford Lash-Up last year in the same area ;-(

Congratulations to Andy Oldham who qualified with 150lb of fish!

Conclusion
As the Maver Match This website states, conditions on the day were not ideal with a strong breeze making things feel much cooler than in the weeks leading up to the event.  Water levels has also been up significantly on account of the wettest winter ever recorded and had been reduced substantially.  That still doesn't excuse me from a poor performance, 2014 hasn't turned out to be as I expected so far!

On the plus side, I won a day with Paul Holland from the Match Fishing Scene website so I'll get some badly needed tips ;-)